Moving beyond recrimination – but we’re not ready yet

Opinion: ‘When the Taoiseach told EU leaders a few weeks ago that Irish families are “worn out”, he wasn’t just talking about water charges or property tax. It was always about fairness’ 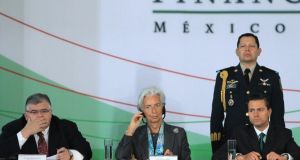 ‘In a single week recently, both the Bank England’s Mark Carney and the IMF’s Christine Lagarde warned that capitalism is eating itself, devouring the social capital essential for its own survival and fuelling inequality.’ Above, IMF managing director, Christine Lagarde with the president of Mexico, Enrique Peña Nieto and Mexican central bank chief Agustin Carstens, during a financial forum in Mexico, in which she warned about the high inequality level that prevails worldwide. Photograph: Mario Guzman/EPA

It’s like this, doctor. A week can pass without even a niggle of irritation. Then a headline declaring a developer is back in the game after a €700 million write down – our debt now – can trigger a near-aneurysm.

The rest of the citizenry is moving on, “willing to move beyond anger and recrimination as a simple, unreflective response to recent difficulties”, as President Higgins put it at an Áras garden party. The healthy, sensible thing to do.

Evidently, it is easier for some: the world looks different for those with the salary, self- assurance and pension prospects of a president, a government minister or a Peter Sutherland. Or the 31 per cent in the Red C/Sunday Business Post survey who are “living comfortably”, perhaps.

But wouldn’t it be more therapeutic – and exemplary – to consign a few of the more brazen ones to hard labour in a sweltering, Qatari stadium- building project, a year for every €100 million owed, with added time for those who shovelled millions into wives’ accounts in return for love and affection (because no marriage vow says love and affection like €100 million, obviously).

When the Taoiseach told EU leaders a few weeks ago that Irish families were “worn out”, he wasn’t just talking about water charges or property tax.

It was always about fairness.

Who will be held to account for the blighted lives and loss of so much that was precious? The hundreds of thousands thrown out of work. The vertiginous decline in workers’ terms and conditions. The mortgaged families pitted against temporary job contracts, the precipitous falls in wages, overtime, hours of work. The taxes and levies and USC. The terrifying, daily, ulcerous uncertainty of people living on the brink of calamity.

It is widely accepted that a banking inquiry will add little to the reports and books already out there. The crucial incorporeal cabinet meeting of September 30th, 2008, is off-limits, probably, because of the constitutional right to cabinet confidentiality. Without access to all documents, footage, phone records from that night, what is the point of it, apart from ritual public humiliations? Senior figures murmur it may be cathartic. During the recent Anglo executives’ trials, Patrick Neary, former financial regulator, was humiliated (again) and we got another insight into his extraordinary passivity. Did it help?

Ireland’s top legal and accountancy firms benefited from the banking crisis. Yet it can be argued the Big Four accountants actually contributed to it with their unqualified audit reports on the banks in 2008 and before.

The chartered accountants association disputes this, saying “the audit is not some form of ‘catch-all assurance’ on an entity’s operational health or viability”. Well, sadly for shareholders and the rest of us, it was assumed that audited accounts published without qualification were exactly that.

Remember “the-fundamentals-are-sound” mantra? Where did the mantra-peddlers get their information on the banks? If it was so wrong, why was it not challenged?

We could go on . . . and on. The chicanery of certain estate agents could occupy an entire column. The more you think about it, the more exhausting it becomes. So, time to take a more global view. Perhaps we should be assured by some top-level hand-wringing over the global economic system?

Now hands up anyone who thinks those speeches gave a millisecond’s pause to a Goldman Sachs boardroom or a developer/banker/estate agent plotting a comeback?

Nearer home, there’s been a lot about how – apparently – we were promised compensation for supporting the European banking system in its hour of cataclysm, then had the promise withdrawn – apparently – because the Government managed to leave the bailout programme without a safety net. Does that mean we snookered ourselves ? Again? Or are they out to get us?

So where is our therapy to be found? Does it lie beyond anger and recrimination?

Or is sustained anger a vital defence against a nation’s collapse into Neary-like passivity and the bread and circuses of toothless inquiries?