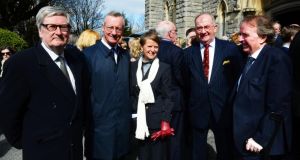 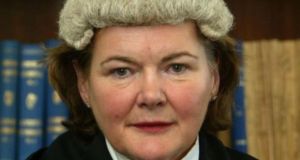 Judge Katherine Delahunt was a vibrant, warm, loving and loved person, who was “always up for a bit of mischief” her funeral Mass heard this morning.

Hundreds from the legal, media and business worlds attended the funeral, at the Sacred Heart Church in Donnybrook, Dublin, of the Circuit Court judge who died on Wednesday at the age of 58. She had been ill for over a year and died in St Vincent’s private hospital.

The mourners were led by her husband, Stephen O’Byrnes, her sisters and brother, step-daughters Emily and Ruth, as well as by nieces and nephews.

Fr O’Connor said he had attended the wedding of Stephen’s daughter Ruth in recent years. He did not usually like dancing. At this wedding however, Ms Delahunt had got him up to dance saying, “loosen up, shake it out”.

He wanted to tell this story “on a day like this when our hearts are sad”. The day would also be a day to “rejoice” in having known her.

Judge Michael Moriarty, who delivered a reflection on her contribution to the world of justice, said Ms Delahunt had been “one of the most accomplished criminal judges in this country”.

From Wicklow, she had studied law in University College Cork and became a solicitor, being made a partner in the firm she joined, Vincent Beatty, when she was 25.

She was the first female solicitor appointed a Circuit Court judge and she presided over family, commercial and finally criminal cases. During her time as a criminal judge about 30 of her judgements were appealed and none was upheld.

“Katherine held the verdicts, 30- nil,” he said. She had endured her cancer diagnosis and treatment with “no self pity”. He described her as generous, fair, and said she made every moment the “absolute best” it could be.

“Katherine really mattered,” he said. “She was a superb human being.”

Stephen O’Byrnes, whom she married four weeks ago after a partnership of 16 years, said she had kept her spirits up through seven types of chemotherapy, over four years. She had always dressed well and “looked great” throughout and “it wasn’t always easy I can tell you”.

“She was the most generous person I ever knew. She always loved good company,” he said. She revelled in going out, seeing friends and loved “the odd piece of gossip”. He spoke of her love of travel and how, ten years ago on a trip to the south of France they “fell in love” with Antibes and bought a flat there.

She had, it seemed, beaten the breast cancer she was diagnosed with four years ago but it was a “cruel blow” when she was found to have a “rogue tumour” and that the cancer spread just months later.

Some people told him in recent weeks they had not realised how ill she had been as she had appeared so strong. The manner in which she refused to bow to her illness or express self-pity, was a “hallmark of her character”.

He closed his eulogy by quoting a toast she used.

The Taoiseach was represented by his aide de camp, Comdt Peter Norton.