Mother and her three young children forced to live in car

Sabrina McMahon (36), who has spent a week in a car in Tallaght, feels ‘like a hopeless parent’

Kitty Holland on the latest developments in the case of a 36-year old woman who says she has been living and sleeping in a car with her three young children in Tallaght in Dublin. Video: Daniel O' Connor 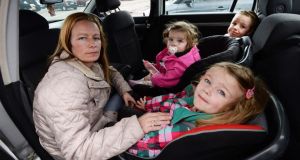 Sabrina McMahon with her children Karl (5), Chelsea (1) and Michaela (3) in the car where they are staying in Tallaght, Dublin. Photograph: Cyril Byrne

A 36-year old woman says she has been living and sleeping in a car with her three young children in Tallaght, Dublin, for the past week after a series of temporary housing arrangements broke down.

In the boot of Sabrina McMahon’s 2005 car are three suitcases, a buggy, nappies and baby wipes. On the passenger seat is a carrier bag of clothes, a bag of bread rolls and milk.

A friend lets her wash and do laundry in her house. “I’ve been putting the kids in their pyjamas in her house, but they had to sleep in their clothes last night.”

Michaela (3) and Chelsea (18 months) sleep in their car seats on the back seat, with Karl (5) sleeping beside them.

“I’m in the driver’s seat. I don’t put the seat back because they have so little space as it is,” she says. “When Michaela wakes for a bottle I knock on the engine to warm up the car.”

“We’re all wrecked. I’m exhausted. They ask where we’re going and I tell them I have nowhere to bring them. I feel like a hopeless parent, just hopeless.”

A spokesperson for South Dublin County Council said it was “aware” of the case. “South Dublin Council does not wish to make any further comment at this stage,” it added.

Ms McMahon has been on the council’s housing waiting list for more than a year while she has been staying with family and friends. Originally from Tallaght, she brought her children back there from Athy, Co Kildare, after her relationship with their father broke down more than a year ago.

“Since then we’ve stayed with my mother, father, sister and friends. But it’s a lot to ask, to ask someone to have a whole family staying in their house.”

In addition, some of their lease arrangements did not allow them to have a family staying. “So last week I had to stop asking.”

She says she has tried to find private rented accommodation but has not been able to find a landlord who will accept rent allowance.

As the head of a family at immediate risk of homelessness, she went to the Dublin Central Placement Service last week but was told she must present at Kildare County Council for emergency housing. She says she does not want to go back to Kildare. “I’d end up isolated again. I need to be near my family and Karl goes to school in Tallaght.”

The placement service did not respond to a request from The Irish Times for comment.

A former dental nurse and carer, Ms McMahon says she would like to go back to work. “If I had a roof, we could get settled and I’d love to go back caring for the elderly.”

Local Sinn Féin councillor Máire Devine has been making representations on behalf of the family for the past year. “This is one of the worst cases but homelessness and housing is now the biggest issue in my clinics. It’s a tsunami and no one in Government seems to have any policy on it, any plan, any direction on this disaster that is affecting thousands of ordinary people.”