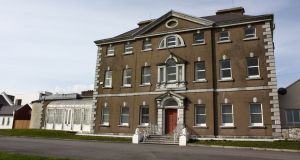 Conditions at the Bessborough Mother and Baby home in Cork led to a clash between church and State when the former bishop of Cork said the State was seeking to ask a religious order to go against canon law.

According to the Commission of Investigation in Mother and Baby homes report, Bishop Daniel Cohalan took exception to a request from the Dept of Local Government and Public Health for information about births at the home.

He was particularly incensed when the department sought the names of the women who were resident, their home address and their present address and he advised the congregation that to do so would be in breach of Canon Law.

“It would be a distinct violation of Canon Law and of natural justice to publish the fact of a secret illegitimate birth with the mother or father’s name without the permission of the mother and father,” he stated.

“I am sure that no Government would knowingly make a demand that would be opposed to Canon Law – in the case of illegitimate births, the name of the mother cannot be inserted even in the baptismal register without her consent.”

Bishop Cohalan also took issue with the department over the issue of inspections which he accepted the department was entitled to do but he was keen to stress that Bessborough was not a state-run institution.

He told the Congregation of the Sacred Hearts of Jesus and Mary, which set up Bessborough in Cork in 1922, that they should remember they were a religious community and not “a department of the Cork County Home and Hospital”.

“You are not a government institution”, he said, adding that while he accepted a department inspection of Bessborough had to be allowed “this inspection must not encroach on your independence as a religious community.”

Bessborough had been established in 1922 when Seamus Lankford of the Cork Board of Guardians, the precursor to local health boards, asked the English-based order to come to Cork to set up a home for unmarried mothers.

Mr Lankford identified Bessborough House in Blackrock, a large Georgian house with 210 acres, as being suitable and the council of the Congregation of the Sacred Hearts of Jesus and Mary agreed to buy it for £6,000.

Cork County Council notified all boards of guardians in Cork city and county of the new institution being run by the Congregation of the Sacred Hearts of Jesus and Mary and the philosophy informing their care for unmarried mothers.

“This community will direct their attention towards the reformation of unmarried mothers and their children and for deserted and orphaned children but no girls who had a second child will be accepted under any circumstances.”

Initially set up to take unmarried mothers and their children, Bessborough began accepting pregnant girls and women and, in 1930, it opened a small maternity unit and three years later opened a 26-bed maternity hospital.

Originally funded by Cork local authorities, Bessborough was later funded by the Dept of Local Government and Public Health (LGPH) but visits by its inspectors led to tension with Bishop Cohalan particularly when infant mortality rates soared.

In June 1941, Dr Florence Dillon of the Dept of LGPH inspected the Bessborough Maternity Hospital and was critical of the fact that although a new hospital, it was overcrowded and understaffed.

In October 1941, Dept of LGPH Inspector, Alice Litster recommended that the department might ask the Mother Superior of Bessboroough Home, Sister Martina to appoint a qualified nurse in charge of the maternity hospital.

Conditions continued to deteriorate and infant mortality increased and by the end of March 1943, some 70 of the 114 children admitted to Bessborough had died, all but one of them dying before they reached their first birthday.

Dept of LGPH Deputy Chief Medical Advisor, Dr Sterling Berry noted the fact that 60 per cent of these children had died would “seem to show that very little steps are taken to keep them alive.”

Meanwhile a report by the Cork County Medical Officer, Dr Robert Condy noted most of the deaths occurred when the infants were between 2-3 weeks and three months and coincided when they left the hospital for the home.

The parliamentary secretary at the department, Dr FC Ward considered the medical supervision of children at Bessborough as reported by Dr Condy to be “criminal casual” and asked Dr James Deeny to investigate.

Recently appointed as the department’s medical advisor, Dr Deeny visited Bessborough with another Dept doctor and Dr Condy and discovered serious neglect of the infants at the home.

He found children with excoriated or chafed buttocks which were grossly inflamed due to nappies not being changed while he also found many were left in soiled nappies and most had infected lessions.

Dr Deeney found that the medical officer at Bessborough was “distinctly culpable” but he also argued that the Reverend Mother should be replaced with someone with ability to run a maternity hospital and care for children.

“The nun in charge of the Infant Dept is both stupid and ignorant – ... she, above all others, must be held primarily responsible for the hundreds and hundreds of babies under her charge who have died in the last few years.”

Dr Ward wrote to the Superior General of the Congregation of the Sacred Hearts of Jesus and Mary in Chigwell in London seeking the removal of the Mother Superior and she agreed to make what changes were being sought.

But Bishop Cohalan wrote to the Dept of LGPH to complain about its role in the removal of the Mother Superior in Bessborough, arguing it was an ecclesiastical appointment over which the department had no jurisdiction.

According to the Commission report, the replacement of the Mother Superior was delayed by four years by Bishop Cohalan’s opposition – probably elicited by the congregation – during which time many infants died in Bessborough.