Mother and Baby Homes Commission: Who was on it and why was it set up? 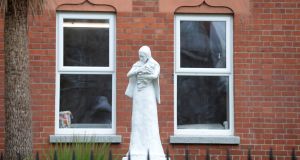 The Mother and Baby Homes Commission of Investigation was set up in 2015 following revelations about the deaths and burials of hundreds of children at one such former institution in Tuam, Co Galway.

Work by historian Catherine Corless in documenting the Tuam deaths created heightened public concern about the treatment of unmarried mothers and adoption practices in Ireland in previous decades.

The commission was charged with examining what happened to vulnerable women and children in mother and baby homes during the period 1922 to 1998.

Its final report – which runs to 3,000 pages – was submitted to the Government on October 30th, 2020 and published on Tuesday.

Ms Justice Murphy previously led the commission which investigated the handling of clerical child sex abuse cases in Dublin’s Catholic archdiocese and which later had its remit extended to include the Cloyne diocese in Cork.

Prof Daly is president of the Royal Irish Academy and former professor of Irish history at UCD. Dr Duncan was professor of law at Trinity College, Dublin, and was a member of the Law Reform Commission.

Barrister Ita Mangan, who also served with the commission which investigated Dublin’s archdiocese and Cloyne diocese, is director of the Mother and Baby Homes Commission.

The commission investigated 18 institutions: 14 mother and baby homes and a sample of four county homes.

It held 195 hearings which involved 64 former residents of the institutions, 30 advocacy groups, 16 sisters/members of religious congregations, 14 experts, 22 social workers, 13 local authority officials, seven Government officials, six workers in the homes, three priests, three gardaí, 12 “others” which included people concerned about particular sites, some whose birth certificates had been falsified, and some who were aware of practices in certain institutions.

The Government had allocated €23 million for the commission’s work. At presentation of its report to the Government last October it had spent €11.5 million.