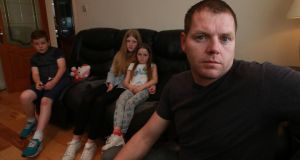 The O’Connor Family at home in Tallaght (from Left) Scott (10), Sophie (15), Stacey (8) and their father, Daniel O’Connor. Photograph: Nick Bradshaw

Danny O’Connor (40), whose young wife and the mother of his three children died seven years ago, has just been served with notice that their home in Kilnamanagh, Dublin, is to be repossessed.

The couple’s life assurance continues continues to refuse to pay out since Ashling’s death, saying “material facts” about her health had not been disclosed when they bought the house. Her consultant, however, has said “at no time” before she became ill in 2008 had she been aware of her illness.

Stepstone Mortgages will seek an order for possession of the three-bed home at Dublin Circuit Court on November 12th.

Ashling was 32 when she died in November 2008, of Systemic Lupus Erythematosus (SLE) – an autoimmune condition in which the body’s immune system attacks healthy tissue, eventually attacking internal organs.

They owned a taxi and Ashling worked days while Danny worked nights.

In June however she developed a rash on her face, her eyes were bloodshot and she had aches in her legs.

“She went up to Tallaght hospital and they admitted her. She was coughing and finding it hard to breathe. They eventually worked out lupus was attacking her lungs,” says Danny.

She was discharged three weeks later, appeared to be better but was readmitted a week later, her breathing dramatically worse. She was transferred to intensive care and put on a ventilator.

“That was the last time I ever spoke to her,” says Danny.

In August she was transferred to Karolinska hospital in Stockholm, Sweden, for specialist respiratory treatment, returning to Tallaght in September. Though improved, she deteriorated further and died on November 27th.

Danny had to give up work and arrears were building.

He approached Irish Life about paying out on Ashling’s death. In June 2009 the company replied. It was “not in a position to admit this claim”, saying “material facts” about Ashling’s health had not been disclosed. They said she had a diagnosis from August 2004 of Raynuad’s disease.

However, her consultant rheumatologist, Dr David Kane, in a report he prepared in June 2010, said although Ashling had experienced “Raynaud’s phenomenon” in the past “she had been reassured there was no underlying illness”.

“At no time was a diagnosis of SLE made and at no time was she made aware that these symptoms could relate to any other condition.”

Irish Life has maintained its position.

Danny has not been able to work since. He is now more than €50,000 in arrears and is seeking further legal advice.

With the help of the Irish Mortgage Holders Organisation (IMHO) he is hoping Stepstone will consider him for the mortgage-to-rent scheme. The IMHO’s David Hall says Danny is a “perfect candidate” for it , though to date Stepstone has not participated in it. Lenders are not obliged to offer it.

Danny has “not had time to grieve” Ashling’s death. He says his children have “lost too much to now lose their home too”.

“Scott was only three when Ashling died; he was most affected, he wouldn’t go to anyone, wouldn’t let me out of his sight. He went to bed every night with a picture of Ashling. He scribbled on it and coloured it in but it was his and he wouldn’t go to bed without it. He’s still very nervous.

“Sophie has a punch-bag she uses to get her frustrations out. She keeps saying, ‘There’s no way I’m leaving this house. This is mam’s house. I’m not leaving it.’ ”

In a statement, Stepstone said: “Stepstone greatly sympathises with any customers who fall into payment arrears and works very closely with all customers to ensure the most appropriate arrangements are put in place . . . Unfortunately, when all alternatives have been exhausted, in some cases the most appropriate course of action is to seek possession.”

Irish Life said: “Irish Life is not making any comment.”