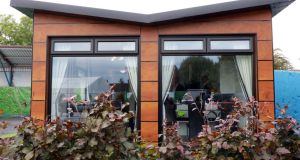 A modular home: the sample houses are prefabricated and can be assembled within days. Photograph: Nick Bradshaw

Plans to install up to 250 modular houses on vacant sites in Dublin for homeless families living in hotels are to be backed by city and county councillors.

The Peter McVerry Trust is calling for emergency powers to be given to local authorities to ensure the housing is erected as quickly as possible.

Minister for the Environment Alan Kelly said the modular houses will cost up to €100,000 each to construct.

“The quality is excellent. These aren’t cheap,” he said at the Labour Party think-in in Co Wicklow.

“If you are thinking years ago of your old prefabricated units in schools . . . they’re nothing like this. I would challenge many people, even if they looked at them, to differentiate between a normal house and one of these.” Asked how long he envisaged families staying in such units, Mr Kelly said a Dublin City Council analysis of them would be ready next week.

Sinn Féin’s Daithí Doolan, chairman of the city council’s housing committee, said after viewing the sample homes he would have “no problem in supporting the proposal” as part of an overall strategy to tackle homelessness in Dublin.

“Putting families in hotels and B&Bs is unacceptable and unsustainable. We must be solution-focused and imaginative in our response to the current crisis in Dublin. The homes I saw today meet all the required building and environmental standards.”

Mr Doolan said he will call on the council management to identify suitable sites as soon as possible and asked that Mr Kelly introduce legislation to speed up the procurement process.

Independent councillor Nial Ring said that, while not all six units would be suitable, he was impressed overall. “I was unsure as to whether this concept of housing would be fit for purpose but I came away from the demonstration convinced that, as a temporary measure, living in these houses was preferable to being stuck in a hotel room.”

Labour councillor Dermot Lacey said he was “very impressed” by one or two of the units. “Some had very good-sized rooms and were of a very good standard,” he said.

Peter McVerry Trust chief executive Pat Doyle said emergency powers were needed to ensure the houses were installed immediately. “What needs to happen, is for modular housing to start coming on stream before Christmas,” he said.

“Our concern is that, without the power to fast-track through the planning and procurement procedures, we won’t see any modular housing until summer 2016.”