Opinion: Those opposed to proposed abortion legislation are actively working against the wishes of the electorate 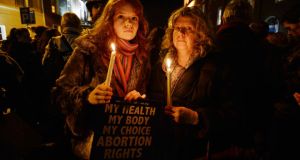 Tomorrow, the Oireachtas health committee will begin hearing submissions from legal and medical experts on the Protection of Life During Pregnancy Bill. If enacted, this legislation will finally — 21 years after the X case — bring clarity for doctors wishing to protect women whose lives are at risk, including from suicide.

One would expect this bare minimum of legal provision for the protection of women’s lives to be broadly welcomed — especially by our political leaders, whom we like to think of as reasonable individuals elected to represent us and to act in our best interest, even if we happen to be women. Unfortunately, though, the last few months have not borne this out, as a small cabal of government politicians have allowed themselves to come under the spell of an aggressive anti-choice campaign.

The upshot of this is that a number of public representatives are actively working against the widely held wishes of the electorate, who have repeatedly expressed their desire for increased liberalisation of Ireland’s abortion laws. The most recent Irish Times/Ipsos MRBI poll found that 79 per cent of people were in favour of permitting abortion where a foetus cannot survive outside the womb, 78 per cent were in favour in the case of rape or incest, and 70 per cent where a woman’s health is at risk. And yet, there are those in government who would oppose even the very restrictive legislation that is currently being proposed.

The thinking behind this flagrant disregard for the general wishes of the electorate can be explained by drawing upon a famous analogy found in Book VI of Plato’s Republic. Plato justifies the ruling elite of philosopher kings in his ideal state by likening political rule to the command of a ship. Just as the steering of a ship requires specific skills and knowledge, so the governance of a state necessitates rule by captains with superior knowledge, including moral knowledge. Indeed, much of the training of the philosopher kings in The Republic is dedicated to discovering the Form of the Good. This equips the philosopher kings with the necessary moral knowledge to govern, and justifies their rule over others, as it is only they who can ensure the ship is safely used for navigation.

Much of the paternalism of this analogy is also characteristic of the actions and statements of those parliamentarians who wish to thwart current efforts to legislate on abortion in Ireland. It is they who know what course of action is right for a woman experiencing a crisis pregnancy, they who feel entitled to deny legislation that might save her life, and they who feel self-righteously “moral” in prohibiting choices in traumatic circumstances, whether these be rape, incest, or fatal foetal abnormalities. The possibility of a woman knowing what is best for her, her capacity for making moral judgements — these are denied by the Irish philosopher kings, who assume to possess moral knowledge superior to the rest of us.

Even if we accept Plato’s belief that political power should be vested in a small, knowledgeable elite to ensure the sound steering of the ship of state, it is clear that the group of mutineer politicians are ill-placed to act as captains in the current context. Rather than steering the occupants of the ship safely into harbour, these representatives gamble with the lives of women, as indeed, have generations of political leaders before them.

Women in Ireland have been denied treatment for cancer, have been forced to carry unviable foetuses to full term, and have been sent home from hospitals with dead foetuses inside them — all in the name of the moral guardianship of the state.

If Irish democracy means anything to these renegade politicians, and if they reject Plato’s paternalism and its attendant justification for anti-democratic rule, then they will bow to the wishes of the majority of the electorate and not stand in the way of the proposed legislation. Women must be viewed as people capable of making decisions and moral judgements rather than as passive subjects upon whom rules concerning our health and wellbeing must be imposed.

Sadly, the refusal to see women as agents means that today, as every day, twelve women are making their way — not metaphorically, but literally — to England on ships for treatment their country refuses to provide.