Mixed Race Irish: ‘We were the dust to be swept away’ 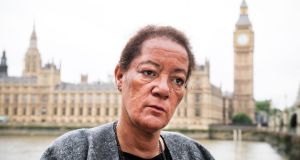 ‘I lived in a state of pure terror’: Rosemary Adaser, co-founder of the group Mixed Race Irish. Photograph: Joanne O’Brien

“My file is peppered with references to my colour,” she says. “The racism was relentless and brutalising. My formative years were devastated by it.”

Adaser is one of about 70 mixed-race people who have come together in the past few years as Mixed Race Irish, a campaign and support group. They believe they were taken into care because they were mixed race, that there was a different unspoken “policy” for them and that they suffered an “extra layer of abuse” because of their racial identity. They say racism was endemic, systemic and systematic, in the care system and in Irish society, and that their experiences were particular to them.

The group’s members live in Britain, the United States, China and Ireland. They would like to be included as a distinct group in the Government-appointed Mother and Baby Homes Commission of Investigation, which has begun its work under Judge Yvonne Murphy. The commission will examine the issue of race in a module alongside disability, religion and Traveller identity, to see the extent to which residents may have been treated differently on any of these grounds.

But Mixed Race Irish fears that the commission will simply record their stories and catalogue instances of racist abuse without adequately acknowledging the way that uniquely systemic racism affected them.

They believe that institutional racism should have its own module, with a separate entry in the final report, and that the commission should define racism as a type of discrimination in the way that the Equal Status Acts do. They believe that experts on racism and psychologists specialising in the impact of racism on individuals should also be called.

Only then, they believe, can the implications of their experiences, not only for them but also for Ireland’s social history, be properly understood.

Adaser, who now lives in London, was born in 1956 to a white Irish mother, who was a telephonist at the Rotunda Hospital in Dublin, and a black Ghanaian father, who was a doctor there. Her mother had to leave the city to have her, such was the shame of being unmarried and pregnant – particularly by a black man.

Her mother did not bring her back to Dublin but placed her in St Clare’s Convent in Stamullen, Co Meath, and it was from there, aged 18 months, that she was transferred to Dublin, to St Patrick’s mother-and-baby home, on Navan Road.

Like other mixed-race Irish children in the mother-and-baby homes, she was never offered for adoption. She believes this was policy, based on a presumption that nobody would want to adopt a mixed-race baby. Instead she was fostered, or boarded out. “When I was four I was sent to a couple in their 60s. No, they weren’t vetted. They were invited to select a child. People were paid by the State to take in children. This couple had no pension, and I was an income source.

“The woman was vicious. I have a clear memory of fearing the gardening gloves, because she would go and cut branches from the rose bushes and cut the flowers off. She called me filthy and nasty and would strip me naked. I was four, remember, and she would whip me with the thorns. Years later I still had scars on my back, buttocks, stomach, legs, arms and soles of my feet, but not my face,” Adaser says. “The whippings were so bad I was hospitalised. After 18 months I was returned to St Patrick’s.”

She describes being made to wait until last for food, and often going without, and of being made to wait until last for a bath. If she complained that the water was dirty after 30 other girls had bathed, a potty of urine and excrement was emptied on top of her, she says. Adaser was made to unblock toilets with her hands, because her skin was “already dirty”. By the time she was eight, older girls made her “sexually pleasure” them or face even harsher beatings than was normal, because “black girls like to fornicate”.

“I lived in a state of pure terror,” she says, “and each night I wondered if I would survive the racist brutality of the institution the next day.”

Nuns told her that “no man will ever want you, because you’re black”; a career counsellor said she should “consider taking man friends” to support herself. “I was told I wouldn’t amount to anything and should consider prostitution,” Adaser says.

Her black background was vilified and even denied, she says, and she was constantly told that she would never be wanted in Irish society. “I was not allowed any identity at all. That is very, very damaging for the soul.”

When Adaser was 14 she attacked a nun who sexually abused her. A psychiatrist said she needed more freedom from the institutional regime. She started going for long walks and developed a relationship with a young man, “the first person who ever showed me love”.

She became pregnant when she was 16, and although the father wanted to marry her she was sent to Ard Mhuire mother-and-baby home, in Co Meath, where her 21-day-old son was taken from her. “Not even my son was my own. I had been reared to believe I was entitled to nothing.”

Not wanted back at St Joseph’s, she was sent to live with a family in Killiney, Co Dublin: the Rotherys, who, she says, rebuilt her. She is still in touch with them.

Adaser found work as a telephonist at the GPO, but each week, she says, she was made to wait until last to be paid. Bananas were thrown at her in the street, and men exposed themselves to her.

When she was 20 she left for England, and until a few years ago she blotted out her life in Ireland. She didn’t tell anyone she was Irish, partly because her past was too painful and partly because people didn’t believe her. “Irish people aren’t meant to be black. Or brown. Or LGBT. Or Traveller.”

She returned to education, taking a master’s degree in social policy at London School of Economics.

She now has a daughter, and grandchildren, as well as the son she gave birth to in Ireland, with whom she is in contact.

“In the end I had to reconcile my past. I was brought up in Ireland. I learned to bake soda bread. I was fluent in Gaelic. I had a lot of counselling. It has been very hard. I don’t blame the older girls in the institutions who made my life hell. They had been brutalised too and were products of the system,” Adaser says.

“The system had taken the eugenics of British imperialism, and Irish society, the church, had to ‘civilise’ us. Our Irishness was an inconvenience, and society did not want us. We were the dust of Irish society, to be swept away, never acknowledged as existing. Many still want us, and the racism, to be airbrushed away.”

Bryan Fanning, head of the school of applied social studies at University College Dublin, and an expert on racism and migration, says that Mixed Race Irish, in seeking to be taken seriously by the commission, is doing a huge service.

“This group are trying to force Irish society to look at the racism that has been embedded in it for generations,” he says. “We like to think there is no real racism in Ireland, but their experience shows it has been a deeply rooted part of Irish society and never properly faced.

“We have a growing population of young, black and mixed-race children in our schools now, facing into a society which has a huge, largely unacknowledged, problem with race. If we can’t begin to explore, in a serious way, racism in our recent history, what are we saying to these children?”

According to the Mother and Baby Homes Commission of Investigation, “The terms of reference include a requirement to identify the extent to which any group of residents may have systematically been treated differently on any grounds, including the grounds of race. Of course, the commission intends to fulfil this requirement but has not yet reached that point in its investigation.”DD