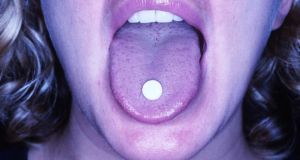 No one, we’re always told, is going to stand up in the Dáil and advocate for leniency or (whisper it) legalisation when it comes to recreational drug use. Photograph: Getty Images

Last April, dance music magazine Mixmag published a feature on PMA, and the deaths it had caused across Britain and Ireland. Nobody intentionally sets out to buy PMA (or para-Methoxyamphetamine), but it has come to prominence recently as a drug that is being “passed off” as the active ingredient in ecstasy (MDMA).

PMA is an unpredictable amphetamine that increases body temperature and causes the release of large amounts of serotonin. Crucially, it acts slowly, which can lead some users to believe they have taken weak ecstasy, and take more.

Why is PMA being used? Most likely for cheaper production costs due to law enforcement cracking down on MDMA.

The article in Mixmag is one of the few decent, factual pieces of journalism addressing pills being purposefully contaminated by PMA and sold as “ecstasy”.

Last summer, recreational drug users were told to be cautious about pills called Blue Ghosts. This ecstasy pill had apparently become so popular that it appeared drug manufacturers were capitalising on its brand by passing off cheaper, unknown substances in its guise. This is a public health issue, but nobody seems to know how to talk about it. We’re still stuck with the old-fashioned Just Say No mantra, when it’s really time to Just Know.

The introduction of the so-called “head- shop” legislation in Ireland – the Criminal Justice (Psychoactive Substances) Act – reacted to the chemical Wild West of synthetic drug production. In the past four years, 250 new chemical drugs have been identified in Europe. As soon as one chemical is banned, drug manufacturers tweak the compound and put something new on the market. Manufacturers have been multiple steps ahead of legislators since mephedrone – a common ingredient in so-called “legal highs” – was banned.

The lead-up to the headshop legislation was an opportunity missed to have a realistic conversation about recreational drug use. Remember the “Happy Hour” legislation? Laws were introduced to stop bars and nightclubs selling cut-price alcohol – two-for-one cocktails and the like – during a given period of time. Any teenager swigging out of a bottle of blue WKD on the top deck of a bus could have told Joe Duffy what was going to happen next. Bars simply sold cut-price alcohol for the duration of their opening hours, not just for a restricted period.

It was an act of classic Irish politics. Step one: moral panic. Step two: inflate the panic with hyperbolic debates in the Dáil and the media. Step three: cobble together reactionary legislation that deals with the topic of the day on a superficial level. It was a blatant failure to address the actual issue – binge drinking – in the same way the headshop legislation was a failure to address the issue of why so many people were getting high. We’ve seen that pattern unfold during the various peaks in the national discourse on cyberbullying.

These issues have one thing in common, which is why they are dealt with in such a ham-fisted manner: young people.

Young people were availing of happy hours, young people went to headshops, young people talk trash on social media. The media, which kickstarts the debate, the politicians who react to it, and the Civil Service, which administers the shoddy legislative outcomes, do not have youth in common. Politicians have been unwilling to start a conversation about drug use due to a mixture of social conservatism and panic about their reputation.

No one, we’re always told, is going to stand up in the Dáil and advocate for leniency or (whisper it) legalisation when it comes to recreational drug use. There are no votes in it. It would be political kamikaze. Really? Maybe someone should tell that to MEP-elect Luke Ming Flanagan, Ireland’s most famous pot-smoker.

This is no comfort to the friends and families of those young people who died after taking pills or powder that they thought was MDMA but turned out to be something far more dangerous.

This summer, young people will be heading off to festivals and on holidays with friends. Some will take drugs. We need real public information, factual warnings, non-sensationalist reporting, and an open, non-judgmental conversation to ensure people stay safe.