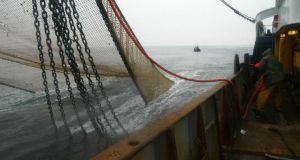 Undocumented Ghanaian, Filipino, Egyptian and Indian fishermen are allegedly brought into the UK using a loophole which lets non-EU seafarers move through the UK for up to 48 hours if they immediately move on to join vessels working in international waters. Photograph: Getty Images

Illegal African and Asian migrant workers are routinely used as cheap labour on board some Irish trawlers, the Guardian has claimed, following a year-long investigation which rocked the industry on Monday night.

The paper claims they earn a fraction of local pay rates and work days on end with little sleep and are held on vessels unless they are given permission to go ashore.

Undocumented Ghanaian, Filipino, Egyptian and Indian fishermen are allegedly brought into the United Kingdom using a loophole which lets non-EU seafarers transit through the UK for up to 48 hours if they immediately move on to join vessels working in international waters.

From there, they are brought to Belfast and then illegally brought into the Republic.

The transit rules were never intended for fishermen working in national waters or constantly coming in and out of Irish ports. The loophole, the Guardian reports, was first used by some elements of the Scottish fishing fleet before the practice was copied by some boats in Ireland.

Some workers have said they lived in fear of being deported, while some trawler-owners have told them to stay on board because the owners would be fined if they were spotted and stopped by the authorities.

One Ghanaian fisherman said he had been hired in Accra by an agent, who found him a job on an Irish trawler and promised to arrange all visas and travel. He entered via Heathrow and Belfast and was told to catch the bus from Northern Ireland to the port in the Republic where his vessel was docked.

He said he had not understood when he was recruited that he would be working illegally. He had to live on his trawler at all times and was told by the owner to hide and not talk to people in port.

The crew would go fishing for four to five days at a time and then be required to mend nets and gear in harbour.

“I worked continuously. We could be awake for two days with almost no sleep. It was horrible,” he said.

The newspaper’s investigation has uncovered immigration records, letters and contracts from boat-owners and agents, publicly available vessel-tracking data and official reports into fatal marine accidents involving migrant fishermen, along with interviews with several well-placed sources. It also has secret filming carried out by a team of undercover reporters.

Despite this, however, they said they still felt oppressed by their lack of immigration status and the constant need to hide and forgo their rights when the industry depended on their labour.

The International Transport Federation (ITF), the union that first sounded the alarm about conditions for migrants in the Irish and Scottish fishing fleets in 2008, said the Irish Government was “turning a blind eye”.

The Manila-based agency which recruited one Filipino crewman, who is now suffering from a stomach tumour, said he had been told he would be paid €1,000 per month for unlimited hours.

“We explain to the crew the working conditions – we know sometimes 24-hour shifts without rest. They know it is day and night. It’s the same in the Philippines, non-stop on fishing vessels. If you work 100 hours it is [the] same pay,” it told the newspaper.

However, the trawler-owner who hired him denied that he had been poorly treated. He had been told he would be working for a trawler operating out of a Cork port.

Equally, it rejected charges that he had been denied proper rest or pay. A second Filipino, who had travelled with the first, said he had been allowed “14 hours sleep every night”, along with three meals a day – including a full “hotel dinner” in the middle of the day. This worker has since returned to the Philippines.