May Day: Marching for bus strike and against water charges

May Day marchers numbered at 6,000 by gardaí make way through Dublin city centre 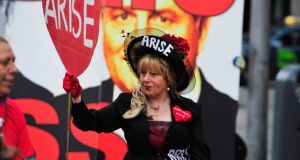 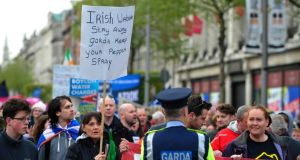 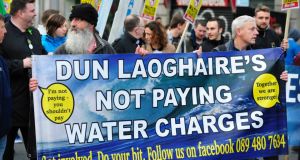 Several thousand people have taken part in a May Day demonstration in Dublin taking on Friday, in anti-water charges protesters and bus strike sympathisers.

The march, organised by the Dublin Council of Trade Unions, was backed by anti-water charges group Right2Water.

Gardaí estimated between 5,000 and 6,000 people took part in the Dublin city centre rally, while organisers put the figure at 10,000.

A number of workers from Dublin Bus and Bus Éireann who are members of represented by the Siptu trade union Siptu were among the demonstrators.

Speakers told the rally it was a day to support all workers and to show solidarity with workers at Dublin Bus and Bus Éireann who had taken took strike action over plans to privatise bus routes.

John Douglas, Ictu president and general secretary of the Mandate union said any privatisation of bus routes would harm workers’ rights and conditions.

He said the situation where waste disposal services in Dublin were privatised could not be repeated.