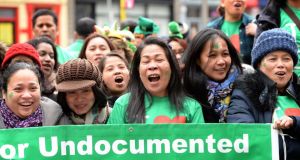 It is estimated there are between 20,000 and 25,000 undocumented people living in Ireland, including children. Photograph: Eric Luke

A majority of the Irish public is in favour of allowing undocumented migrants the right to live and work here legally, according to a poll commissioned by the Migrant Rights Centre Ireland (MRCI).

The Red C poll, carried out last month among a representative sample of just over 1,000 people, found that 69 per cent were in favour of providing undocumented people a route back into the system.

When asked about regularising the status of undocumented children in Ireland, the percentage in favour rose to 79 per cent.

A large majority (84 per cent) also supported legalising the status of thousands of undocumented Irish migrants in the US.

The findings come as the Government considers a proposal by the MRCI which – if accepted – would provide a pathway to regularisation for up to 20,000 people.

Helen Lowry, a spokeswoman for the MRCI, said the poll indicated that Irish people would strongly support such a measure.

“What’s more, most people recognise that giving undocumented people in Ireland this chance would strengthen the Irish Government’s representations on behalf of the undocumented Irish in the US,” she said.

It is estimated there are between 20,000 and 25,000 undocumented people living in Ireland, including about 5,000 children.

Research indicates a large majority of the undocumented people living in the Republic entered the country legally on visas in recent years and subsequently became undocumented.

A spokesman for the Department of Justice said the MRCI’s proposal was under consideration.

The department has, to date, opposed any large-scale measures to regularise the status of migrants and opted instead to examine requests on a case by case basis.

However, former minister for justice Alan Shatter has expressed support for regularisation measures.

“Just like the undocumented Irish in the US, all we want is a fair chance to come forward and get back into the system. I am deeply grateful that the Irish people feel we should be given that opportunity.”

Ms Lowry said regularisation was a pragmatic, straightforward and transparent way to address this issue.

“We propose a regularisation scheme with clear criteria which would allow people to come forward and regularise their status. This is about recognising reality; this isn’t going to go away,” Ms Lowry said.

“The public has given the Government a mandate to act now and introduce a regularisation. The time is now.”

The poll asked individuals to respond to the following statement:

“Undocumented people in Ireland should be granted the opportunity to earn the right to live and work in the country.”

A total of 69 per cent agreed, while 18 per cent disagreed. The remainder answered either “neither” or “don’t know”.