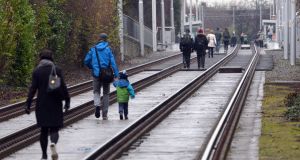 Luas staff have called two one-day strikes next month, including St Patrick’s Day when thousands of people coming into Dublin city centre for the parade will be affected if the stoppage goes ahead.

Both Luas tram lines were closed due to strike action last Thursday and Friday, and will be again on the same days this week.

Siptu, the union representing the majority of Luas workers, has stepped up the protest action by announcing further strikes on Tuesday, March 8th, and Thursday, March 17th when Dublin will be thronged with revellers for the St Patrick’s Day celebrations.

The dispute centres on a claim by Luas staff for improved terms and conditions, including pay increases of up to 53 per cent in some cases.

A spokesman for Siptu said there had been “talks about talks” but there has been no formal resumption of discussions with representatives of Transdev, the company which operates the Luas.

“It is now incumbent on the management of Transdev and other stakeholders responsible for the operation of the Luas to engage meaningfully with the union and its elected workplace representatives in order to avoid the escalation of this dispute,” said Siptu transport sector organiser Owen Reidy.

In a statement, Transdev managing director Gerry Madden expressed his “shock and disappointment” at the latest announcement by the union.

“Not only are Siptu threatening the company and Luas customers but they will seriously impact business and the tourist sector by their actions,” he said.

“They will damage the Irish economy, businesses and the good reputation of Luas. Their action will impact on the thousands of families who use Luas to travel into and out of the parade, not just the parade but all the events in the city associated with the festival,” he added.

Mr Madden repeated his company’s position that the pay claims were “extreme and unjustified”.

Minister for Transport and Tourism Paschal Donohoe said it was “excpetionally bad news” for the people who would be flocking into Dublin for the national holiday.

“It appears the decision to stage a further two days of strike action, in particular on St Patrick’s Day, is being taken with a view to causing maximum disruption, which will be welcomed by no-one,” he said.

The Minister appealed for both sides to work on their differences through third party arbitrators in order to avoid further disruption.

A spokesman for Dublin Chamber of Commerce said the strike on March 8th might prove more problematic for Luas passengers as buses tended to operate more efficiently on public holidays when there was less commuter traffic.

“It’s probably not a great day for them to have a strike because there won’t be the same levels of commuter traffic on the roads. As long as we get more buses on the roads and more trains on the rail lines, then we can probably cope with that one as a city.”

The National Transport Authority has not yet announced any additional measures to cater for travellers on St Patrick’s Day.