List of victims who died in Northern Ireland Troubles read out

Names of more than 3,500 people read carefully and patiently in event at Unitarian Church in Dublin 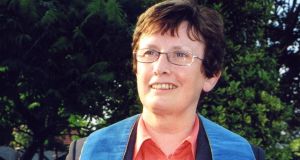 Rev Bridget Spain: “It does underline very movingly, I think, the frailty of life and the randomness of death in conflict.”


The names of the more than 3,500 people who died in the Northern Ireland Troubles were read, carefully and patiently, in a quiet event at the Unitarian Church in Dublin yesterday.

Now in its 14th year, this is the first in a number of years that no new name was added to the sad litany.

Last year was added that of David Black, the prison officer who was murdered as he drove to work along the M1 in Co Armagh in November 2012.

The first name was Anthony Abbott, a soldier from Manchester who was shot dead by the IRA in Ardoyne in north Belfast in 1976. The last names, read at 3.10pm, were William and Letitia Younger, an elderly Protestant man and his daughter, who were beaten, stabbed and shot by intruders in their home in Ligoniel, also in north Belfast, in 1980.

Chronologically, the first death is listed under ‘S’, being that of John Patrick Scullion, a Catholic storeman shot by the UVF in Belfast in 1966.

Some 18 people took just over three hours to read out each name in alphabetical order. As the names began to be read out – “Anthony Abbott, Alexander Abercrombie, Colin Abernethy, Kieran Patrick Abr am, Alfred A cheson, Kenneth J A cheson, Joseph Adair. ” one was struck by the anonymity of these names to anyone beyond those who had known and loved them personally.

There was no indication of the circumstances of each of these people’s deaths, where they had lived, what they were doing or their age. Each might have been an infant or elderly person and anyone listening was aware of them for a just few seconds .

“No we don’t go into details at all,” said Rev Bridget Spain after the ceremony. “Just the names and it does underline very movingly I think the frailty of life and the randomness of death in conflict.

“A few names will jump out, the high-profile names that are familiar – Marie Wilson, Robert Nairac, Airey Neave – but there are just so many that are remembered publicly here for a few seconds and then, well, it’s almost as if that’s all that’s left.”

People came and left throughout the ceremony, which is welcomed by Rev Spain, who says she would not expect people to sit for over three hours. “You see people coming, listening maybe for a name, shedding a few tears and then going.”