Ireland ranked 10th best place in the world to grow up

Research dating back to boom found 86% of children here happy 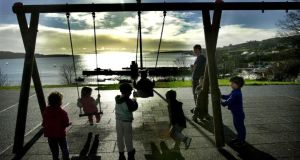 The research found 86 per cent of children in Ireland were happy with their lives, while there was also a “significant decline” in the number of those smoking and more modest declines in drinking and teenage pregnancy. Photograph: Matt Kavanagh


Ireland has been named the 10th best place in the world for children to grow up among a list of developed countries, ranking ahead of both the UK and the United States.

The league table of 29 countries in the Organisation for Economic Co-operation and Development (OECD) is published by the children’s charity Unicef today.

Report Card 11 – Child Well-being in Rich Countries is the culmination of research dating back to 2001, focusing on children between the ages of one and 18.

The Netherlands, Norway and Iceland top the table, in that order, while Romania takes bottom place below Latvia and Lithuania respectively.

The UK is in 16th position and the United States in 26th.

Although admittedly carried out through the “boom times”, the research found that the 2000s saw an increase in the number of Irish children participating in further education.

It says 86 per cent of children in Ireland are happy with their lives, while there was also a “significant decline” in the number of those smoking and more modest declines in drinking and teenage pregnancy.

Ireland has the highest rate of children exercising – almost one in three – for at least an hour a day.

There were also positive findings in relation to children’s relationships with their parents: 83 per cent find it easy to talk to their mothers, with 68 per cent saying the same of their fathers.

However, the research noted a rise in the number of overweight children, now at over 15 per cent, more than in the UK, Germany and France.

There was also bad news in the context of the debate surrounding bullying, with Ireland just one of five countries to experience an increase over the last decade. Some 28 per cent said they were being bullied.

One-quarter of children asked if they would label classmates as being kind and helpful said they would not.

And when asked to name the defining issue of their generation, they put a need for better mental health services at the top of the list.

Peter Power, executive director of Unicef Ireland, said the findings display “huge progress” in Ireland. “It’s vital we don’t forget the children who are behind these statistics who have always been below the poverty line and continue to fall,” he said.

“We are in danger of leaving our most vulnerable groups of children behind.

“The growing levels of bullying are a warning to our society to do more to tackle a problem which has devastating and long-lasting effects.”