Ireland at risk of reaching US levels of income inequality, says study

Gap widening as over 33% of earnings in hand of top 10% of earners, report finds

Tasc research indicates State now the most unequal country in the EU when it comes to how the economy distributes income. Photograph: Getty Images

The gap between rich and poor is on the rise with more than a third of all income concentrated in the hands of the top 10 per cent of earners, new research indicates.

It is one of a series of findings by the think-tank Tasc, which warns that income inequality will edge closer to US levels unless there are changes in economic and social policy.

The research says Ireland is now the most unequal country in the EU when it comes to how the economy distributes income, before taxes and social welfare payments are included. 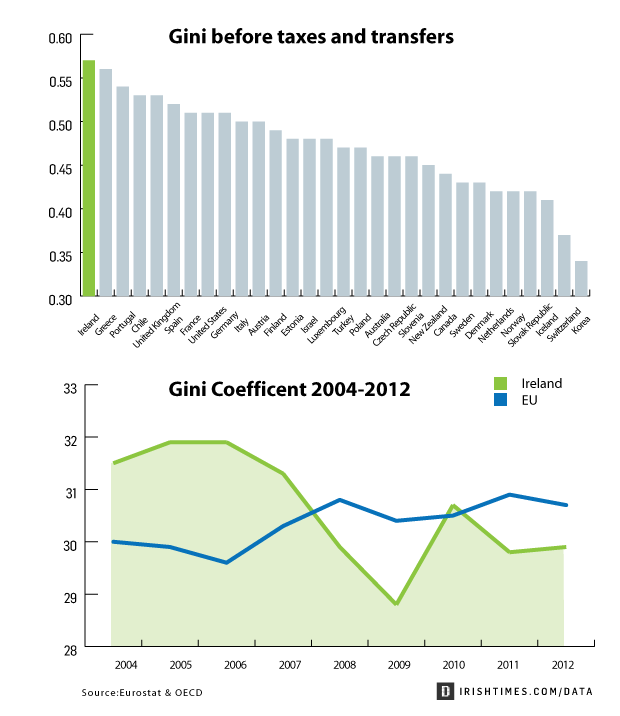 Our income inequality is reduced to close to the EU average when these factors are included. However, the report says it will get more expensive to narrow this gap if inequality continues to grow.

With one in five workers on low pay, and with a relatively low overall tax take, the system in Ireland is in danger of being “stretched to breaking point”, the report claims. It says calls from all sides in the political debate to cut taxes – instead of proposing investment in public services – will simply entrench economic inequality and mislead the public about the negative consequences.

“Income inequality leads to poverty and social exclusion. But it also lowers demand in the economy in a downward spiral of lost spending,” said Nat O’Connor, director of Tasc. “The concentration of income in fewer hands gives the wealthy more power to lobby for tax cuts that will disproportionately benefit them.”

The findings come at a time when inequality is back on the global political agenda, sparked in part by French economist Thomas Piketty who has argued that modern capitalism is leading to unsustainable levels of inequality.

The Tasc report, Cherishing All Equally: Economic Inequality in Ireland, draws on Revenue tax returns and other data so build what it says is the most complete picture to date of inequality in this country. The findings pose new questions over the definition of the “squeezed middle”, given that two-thirds of individuals or couples had gross household incomes of less than €35,000 in 2011.

Jennifer O'Connell: ‘Back to normal by August’? No thanks

Eoghan Harris’s secret account was discovered as a result of poll data 01:39
Development of new national maternity hospital hit by row between Ministers 01:00
Local business operators hope Irish will return to Medjugorje 01:00
JWT closure a blow, but ‘the Irish will be the first back into Lourdes’ 01:00
Covid-19: HSE advises people to wear face masks as restrictions ease 01:00

1 Miriam Lord: Dublin Bay South gears up for the battle of the barristers

4 Why are women more hesitant to get the Covid-19 vaccine?

Thinking Anew – The importance of acceptance