In Kenny’s book the Constitution is king . . . not the church

Column: In the early years of the State, government leaders pronounced their devotion to the Catholic hierarchy 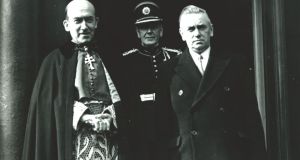 Archbishop John Charles McQuaid with then taoiseach John A Costello and (standing behind) Costello’s ADC, Mick Byrne. Costello told the Dáil: “I, as a Catholic, obey my church authorities and will continue to do so . . . There will be no flouting of the authority of the bishops in the matter of Catholic social or moral teaching.”

The preoccupations of the Irish Catholic hierarchy in the early years of the State were the twin and related evils of company-keeping and dancing and the subversion of the morality of the Irish people caused by the importation of indecent and obscene literature, notably English Sunday newspapers (company-keeping was the practice whereby unmarried couples would spend time with each other alone).

In 1926 the then archbishop of Tuam, Thomas Gilmartin, warned: “In recent years the dangerous locations of sin have been multiplied. The old Irish dances have been discarded for foreign importations which, according to all accounts, lend themselves not so much to rhythm as to low sensuality . . . Company-keeping under the stars of night has succeeded, in too many places, the good old Irish custom of visiting, chatting and storytelling from one house to another, with the rosary to bring all home in due time.” This prelate also advised fathers: “If your girls do not obey you, if they are not in at the hours appointed, lay the lash upon their backs.”

‘Destruction of virtue’
The Catholic bishops as a whole had issued a statement in 1925 which read: “The surroundings of the dancing hall, withdrawal from the hall for intervals, and the back ways home have been the destruction of virtue in every part of Ireland.”

The agitation of the bishops prompted the Cumann na nGaedheal government to arrange for the enactment of the Censorship of Publications Act 1927 which gave to the five members of the censorship of publications board the power to prohibit the sale and distribution of a book which was considered “in its general tendency, indecent or obscene” and of any periodical (including newspapers) that were considered to have “unusually or frequently been indecent or obscene”. It also made the publishing, selling or distribution of literature advocating birth control an offence. Later on, a special tax was placed on imported newspapers.

Later still the Public Dance Halls Act was passed, which sought to regulate the circumstances in which dancing in public could take place either in the open air or otherwise. On taking office in 1932 Éamon de Valera sent a message on behalf of his government of “respectful homage and good wishes” to pope Pius XI and assured him of “our intention to maintain with the Holy See that intimate and cordial relationship which has become tradition of the Irish people”. A few weeks later at the commencement of the Eucharistic Congress, de Valera told the papal legate that the Irish people were “ever firm in their allegiance to our ancestral faith”.

On coming into office in 1948 the first inter-party government, led by John Costello, sent a message to the then pontiff stating: “On the occasion of our assumption of office and of the first Cabinet meeting, my colleagues and myself desire to repose at the feet of your Holiness the assurance of our filial and of our devotion to your August Person, as well as our firm resolve to be guided in all our work by the teaching of Christ, and to strive for the attainment of the social order in Ireland based on Christian principles.”

Bishops object
In 1950 the then minister for health, Noel Browne, sought to introduce a mother-and-child scheme which had the following features: a free, non means-tested medical scheme for all mothers in respect of motherhood and children (children up to the age of 16); this to be provided in the main by dispensary doctors; the doctors would keep records of the illnesses of their patients; and the doctors would give health guidance to the mothers and children. The bishops objected in principle to the free-for-all scheme and to the proposal that doctors would provide health guidance on the grounds that this might result in doctors giving guidance on birth control and abortion. The government capitulated.

Costello, in the ensuing Dáil debate, said: “I, as a Catholic, obey my church authorities and will continue to do so . . . There will be no flouting of the authority of the bishops in the matter of Catholic social or moral teaching.” The minister for external affairs, leader of one of the coalition parties and former leader of the IRA, Seán McBride, said: “Those of us in this House who are Catholics, and all of us in the government who are Catholics, are, as such of course, bound to give obedience to the rulings of our church and our hierarchy”. Noel Browne said: “I, as a Catholic, accept unequivocally and unreservedly the view of the hierarchy on this matter.”

Enda Kenny, on being challenged by the Catholic hierarchy on legislation for abortion in accordance with the Supreme Court ruling in the X case said on May 6th, 2013: “My book is the Constitution . . . That’s the people’s book and we live in a republic and I have a duty and responsibility, as head of government, to legislate in respect of what the people’s wishes are”. In response to the threat of excommunication from the Catholic Church, he said: “I have my own way of speaking to my God.”