As we think of Irish abroad this weekend, don’t forget plight of migrants in Ireland 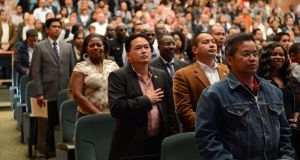 New citizens listen to the National Anthem at a Citizenship Ceremony in the National Convention Centre Dublin. Photograph: Frank Miller / The Irish Times

This weekend’s St Patrick’s Day celebrations in Washington will take place amid fresh hopes of genuine immigration reform which will benefit tens of thousands of Irish people living below the radar in the United States.

As they descend on the White House, Capitol Hill and Irish centres right across the US, our own political leaders will no doubt be keen to highlight their efforts to secure change.

Successive governments have beaten a trail to Irish-American politicians to try to bring about reform, and if it is delivered they will bring real benefits for men, women and children cut off from their loved ones back in Ireland and often living in fear of a knock on the door.

It will be a time for the Taoiseach and other senior politicians to bask in the appreciation of grateful Irish communities. The battle to reach this stage has been long and hard and involved intensive lobbying.

However the politicians should match their race to claim some of the success in the corridors of power in Washington with enthusiasm about the need for reforming an immigration system in Ireland which has repeatedly been found to lack transparency and have no clear rules and no independent appeal mechanisms.

Through our work as an independent law centre, the Immigrant Council of Ireland sees first-hand the difficulties being caused for people who have decided to commit themselves to this country.

Too often they face a bureaucratic system based on discretion and with no fixed structure. Many people legally living in Ireland are cut off from their loved ones.

At the immigrant council, we have been highlighting the lack of clear, fair and just rules on family reunification. Research we have undertaken as part of a Eu ropean Union family reunification project has shown that we are close to the bottom of the league in relation to Irish citizens and migrants living here legally being able to enjoy family life in the country that is their home.

The right to family reunification is not recognised in our primary laws. As a result, migrants and Irish citizens are being split from their loved ones. In some of the more heartbreaking cases, the council is attempting to support and help parents who are watching their children grow up on Skype.

In one case, a Brazilian mother breastfeeding a nine-month-old Irish citizen baby and facing deportation turned to us for assistance. In legal proceedings at the High Court, we highlighted that sending the mother home would amount to “constructive expulsion” of the baby which would have been a breach of Ireland’s obligations under protocol 4 to the Europe an Convention on Human Rights. The protocol prohibits the expulsion of a country’s own citizens. The council secured a settlement which ensured the woman was granted residency status.

These cases are not unique, and family reunification is an issue for many people in this country.

While it is true there have been some improvements in our immigration system, there is still a long way to go. Shortfalls in the laws and regulations have been highlighted by the courts and international organisations.

Earlier this month, we supported a migrant victim of domestic violence to win residency for herself, a young daughter and infant son. Our efforts were successful, but the family had endured a five-year legal battle and two High Court actions, in a situation which can hardly be described as fair.

One of the driving forces behind the reform in the United States is the recognised need for workers to fill a skills gap. This is a problem that has been highlighted here too by some of our major employers and earlier this year by a Council of Europe report.

Despite the recession, companies are struggling to fill foreign language and IT vacancies because of prohibitive work permit requirements. In its compliance report in January, the Council of Europe warned that we are not meeting our commitments under the social charter.

The report found that work permit fees were excessive, while migrants were not being treated equally in terms of access to vocational training.

Reforms in this area would not only bring us into line with other EU member states but also make economic sense. The immigrant council has welcomed indications from Minister for Jobs, Enterprise and Innovation Richard Bruton that he will be taking action in this area.

One of the most difficult aspects of the immigration system is the lack of independent appeals. Often people are given an answer with no explanation and have very few options to reapply.

The Office of the Ombudsman, Emily O’Reilly, says it wants to bring the immigration service under its remit, but this has not happened. We believe such a move would be a major improvement and give people an opportunity to correct any mistakes they may have made in an original application.


Immigrant input
Emigration is part of our history in Ireland. It is the time of year when we focus on the roles of our people in developing the new worlds, not just in the US but also in Australia, Africa and other far-flung places.

Less documented is the role migrants have played in developing Ireland. Whether it is Viking Dublin, the Celts of middle Europe or St Patrick himself, much of our heritage is down to immigration.

It is clear that migrants will also help decide our future. They are committed to using their skills to help rebuild the economy, while many have taken the ultimate step of becoming Irish citizens.

We owe it to them to have a modern and efficient system which is fair to all.