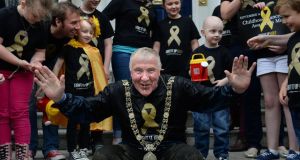 If you have recently been nominated for the ice bucket challenge, the fundraising phenomenon which has swept the country recently, then it might be advisable to prepare for the event in the same way as the Lord Mayor of Dublin, Christy Burke did.

“I have a cold shower most mornings,” he said nonchalantly after having a bucket of ice water dropped upon him on the steps of the Mansion House this afternoon.

“I go into the sea at Dollymount most days and indeed I was in the Atlantic Ocean in Connemara a few weeks ago.”

So perhaps it wasn’t quite as challenging for the mayor as it is for most but, regardless, it was for a good cause, in this case raising awareness for the Light It Up Gold campaign organised by the Childhood Cancer Foundation.

Asked for his nominees ahead of his public soaking the lord mayor named some high profile candidates: the acting Garda Commissioner Noirin O’Sullivan, Dublin goalkeeper Stephen Cluxton and Dublin city senior executive Peter Finnegan who he invited to come to the Mansion House to “get ice-bucketed”.

Lily-Mae Morrison, known to many people in Ireland as the Tiny Dancer after a group of Irish musicians came together to record a version of the Elton John song of the same title to raise money for her care, was one of those who helped soak the lord mayor.

Speaking yesterday her father Leighton Morrison said “childhood cancer is a very untalked about subject. The numbers are probably on the low side when you think about cancer in general but...children are getting cancer, children are dying from cancer. We’re trying to bring it more into people’s consciousness”.

Mary Claire Rennick of Childhood Cancer Foundation said increased awareness of childhood cancer “will improve early detection and increase understanding among policy makers and communities which will hopefully reduce the isolation of families going through childhood cancer treatment and side effects.”

Brendan Hayes from Bantry whose daughter Rene Murnane-Hayes was diagnosed with leukaemia at the age of 11 said many of the families present at today’s event “have endured or are enduring childhood cancer”.

“Childhood cancer is something that we forgot about...last year we held a walk in Dublin alone, this year year we’ve expanded it to three walks. Every year we’re hoping to broaden it to raise awareness,” he said.

The Light It Up Gold campaign is asking that buildings around Ireland are lit up in the month of September to raise awareness of childhood cancer while three candle-lit walks will take place in Dublin, Cork and Galway on September 6th.