‘I wanted to end it all’: Distressed borrowers share their stories 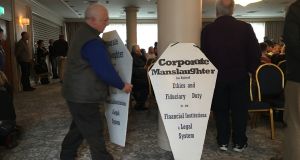 Frank Masterson placing his protest placards at the meeting in the Killeshin Hotel on Saturday. Photograph: Conor Pope/The Irish Times

“I can’t say this in my voice because I will cry,” the hastily scribbled note started. “But I have decided that the day they come to evict me I will have hung myself the night before. I will fight until then but if I lose I can’t face homelessness.”

This stark and disturbing message was given to The Irish Times on Saturday at a public meeting in Portlaoise which was called to highlight an eviction crisis that has blighted the lives of thousands of people across the Republic.

The woman who slid the note into our hand with a whispered request that it remain unread until she left the building was in her 50s and immaculately turned out. Once her message was delivered, she left the Killeshin Hotel ballroom, where more than 200 people were gathered to discuss what was characterised as a complete failure on the part of the banks to engage with distressed borrowers.

She wasn’t the only person in the room who had contemplated suicide. A man who asked to be identified only as Tom (not his real name) was locked in a seemingly endless struggle with his bank. It has taken its toll. He talked of days spent alone in his garage with a measure of rope by his side.

When he spoke to this newspaper he made it clear how scared he was he would be identified. He has spent years hiding his financial distress from family and friends. Letters from his bank demanding money or the keys to his home have been burned and he is burdened by a great shame, misplaced though it may be.

Tom is a block layer by trade. He bought a site in 2005 and built three houses on it with borrowed money.

“The bank had no problem giving it to us. I put my house up as collateral,” he said. “Then the crash happened. I’ve been in court six times as they pushed for repossession of my home. They have everything else.”

As his financial crisis worsened, his wife fell seriously ill and was diagnosed with cancer. The bank never let up.

“I remember one day she was heading into theatre for surgery. I was walking by her trolley’s side and the bank just kept ringing me, over and over again,” he said.

The pressure he was, and still is, under was impossible to hide. “I’m going to keep fighting, but there was a time when I just sat in my garage for days on end on my own with a piece of rope. I just wanted to end it all. We’ve lost everything. We worked day and night on those houses, and all our money was invested in it. And everything was lost.”

Then there was Marie (not her real name). As she talked about her multiple court appearances and the loss of her farm and her business, and the constant threat to her family home, tears streamed down her face. She, too, was fearful she would be identified.

Her troubles started when she took out a loan to expand her business in 2006. Her timing could not have been worse, and everything quickly fell apart. A repossession order has been granted against her home.

“We will keep fighting,” she said. “They can take me out of my house in a box. We have lost our farm and we have lost our business, but they’re not taking my home.”

“Even when people do deals with the banks, they are left with debts that never leave them,” he said. “The burden stays around their necks forever, and the problem is not being spoken about. We must discuss possible solutions to alleviate the pain and the suffering that has been imposed on hundreds of thousands of people by two successive governments who have bailed out the banks.”

He told a story of a woman he met in a midlands court house.

“It was like talking to an empty shell,” he said. “She was gone. There were tears rolling down her face. This couple were going into bankruptcy and needed €4,000 for the process. First they sold their cooker, then they sold their furniture. Eventually, their house was repossessed. They are now living in their car in a secluded place with their 14-year-old daughter.”

The story sparked anger in the room, but solidarity too. The people in the audience were not big-time developers who threw the dice too often. For some, their only gamble was to buy into the line that investing in property was as safe as houses. For others, their only mistake was to buy a home at the wrong time or to lose a job.

Dylan Owens is a film-maker working on a documentary about eviction. He told the meeting how people in mortgage distress had been abandoned by the State.

“If I stab somebody, I can get legal aid, but if I want to challenge the banks who want to take my home, there is absolutely no State support,” he said.

“That is not the end; it is just the start. We got our seven-day letter eight years ago,” he said, to applause.

Ciara Ruschitzko is a barrister but “not a member of the Law Library”. She helps lay litigants manage cases and said: “On a daily basis I am shocked, appalled and sickened by what I see going on in the courts.”

She had simple messages which could be condensed into four main points: stay in your home, keep talking, don’t fear the law, and don’t let the banks win. She said the biggest mistake people were making was not showing up in court.

“If you don’t show up, you have fundamentally said: ‘Here, lads, have my house.’ It is so disheartening when I hear names called out in court, and nobody stands. If you are in trouble, you try and engage with the banks.”

All 158 TDs were invited to attend, but only four showed up: Michael Fitzmaurice and Kevin “Boxer” Moran from the Independent Alliance, Sinn Féin’s Kathleen Funchion, and Seán Fleming from Fianna Fáil. While they were welcomed by Smollen, many were not pleased to see them and some insults were thrown their way.

While anger was directed at politicians, the meeting ended with Smollen urging more of them to attend a further meeting at the end of this month.

“People are going to court with no one to support them, and they’re going home and doing terrible things to themselves,” he said. “Politicians can resolve this. They are the only ones who can resolve it.”

Marie was not convinced resolution would come. “People are afraid to stand up,” she said. “I am afraid to stand up, even though I know the fear suits banks and politicians. They don’t want us to talk. They want us to be divided. They just play games, but unfortunately they’re playing with people’s lives. I spend my waking hours studying the legal system to try and better defend myself, and then the bank comes into court with teams of highly paid barristers and solicitors. What chance do I have?”