Tensions between pro-choice and pro-life demonstrators 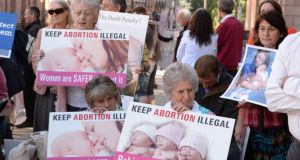 Protesters praying outside the Dáil as the debate took place over the abortion Bill. Photograph: Alan Betson/The Irish Times

Hundreds of people protested outside Leinster House to oppose and support the passage of the Protection of Life During Pregnancy Bill.

While lengthy debates on the Bill took place inside, several hundred pro-choice and anti-abortion protesters demonstrated outside.

At several points throughout the protest, which began yesterday afternoon, tensions rose between the opposing sides. Gardaí said there were no serious incidents.

The Government had not listened to expert opinions from psychiatrists and obstetricians before making up its mind, according to Pro Life Campaign spokeswoman Caroline Simons. She added she expected a dignified protest from the pro-choice supporters

“All I would say to them is the Bill is going to pass. You’ve won and I would have thought you’d make a dignified withdrawal today and let people who are very upset about this make a dignified stand for life,” she said.

“It’s a great day for women, but more needs to be done,” said director of the National Women’s Council of Ireland Orla O’Connor.

Ms O’Connor referred to the more than 17,000 people who took part in the council’s campaign to provide X-case legislation as evidence of the high level of support throughout Ireland for access to abortion.

Youth Defence spokesman Tim Jackson said the vote was a “terrible, detrimental step in terms of a civilised society” and said he his organisation will not stop opposing abortion.

“We are calling for a referendum on the Bill using article 27, a provision which lies there in the Constitution. If 55 TDs and 31 Senators sign a petition to the President to allow it, that the people would have the ultimate say on this Bill, because it is such a contentious issue”

Speaking yesterday evening, Action on X spokeswoman Sinead Kennedy said after years of campaigning, she will stay outside Leinster House until the Bill passes, but that this law does not go far enough.

“We have been waiting 21 years for X case legislation and . . . it seems to me that this Government is more interested in restricting access to abortion.”

Man found guilty of murder of Ciara Glennon and second woman in 1990s 22:00
Traffic figures for Dublin ‘slightly down’ on pre-Level 3 restrictions 21:52
No deadline set for restoration of Shelbourne Four statues 21:44
People leaving Catholic church because they are tired of ‘little old men’ - McAleese 21:44
Representatives of hospitality sector in Donegal claim ‘total panic’ 21:43

1 Donegal to move to Level 3 Covid-19 restrictions, Taoiseach confirms
2 Covid-19: Three more deaths and 324 new cases in State as ‘green list’ of countries reduced
3 Covid-19 Q&A: How are we doing now and is there any good news?
4 Coveney to visit US next week amid heightened concerns over Brexit
5 Mother refused meaningful access to teenage daughter in ‘profoundly sad’ case
Real news has value SUBSCRIBE