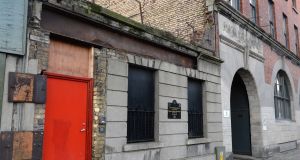 A group of 16 former residents have been demonstrating in the Brú Aimsir hostel on Thomas Street since last night. Photograph: Cyril Byrne/The Irish Times

Homeless service users are holding a protest in a Dublin hostel over its planned closure during the summer.

A group of 16 former residents have been demonstrating in the Brú Aimsir hostel on Thomas Street since last night and are demanding that those who are responsible for operating the facility talk to them about their concerns.

Brú Aimsir was opened last November as part of the Cold Weather Initiative organised by the Dublin Regional Homeless Executive and was due to close on April 19th, but its operation has been extended to June 30th to provide for an orderly wind-down.

No new clients are being accepted into the 101-bed facility, which offers health clinics as well as basic food and shelter for rough sleepers, and it is thought that the building may be sold rather than maintained as a hostel for next winter.

“We’re not happy about it closing ourselves, we think it should stay open,” said Conor Hickey of Crosscare, which provides services at the hostel.

The facility is funded by Dublin City Council through the regional homeless executive, but the building itself is owned by the Department of Communications, Energy and Natural Resources and was only handed over for a short-term lease to ease pressure on homeless services.

“The homeless crisis is getting worse and worse so the idea of putting 101 people out onto the streets isn’t right in this day and age,” added Mr Hickey.

Gardaí were called to the scene of the protest yesterday evening but no action was taken to remove former residents who are occupying the premises.

“We’re all homeless, we’re all using the Brú service. I myself have been using it for three weeks,” one protester, who wishes to remain nameless, told The Irish Times.

She estimates that around half of all beds at Brú Aimsir are now vacant, but when she requested to be referred to the facility by Fingal County Council she was told there were no more beds available and was advised to go to John’s Lane hostel instead.

“[Brú Aimsir] is an unbelievable service, staff are brilliant, the whole place is brilliant,” she said.

“All we want is to sit down with somebody that can answer the questions that we have,” she added.

Dublin City Council has not yet responded to a request for comment from The Irish Times on its future plans for the Brú Aimsir site.