Oireachtas committee says it is no longer tenable to deny ethnicity 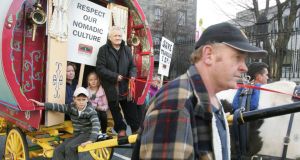 Mary and Timmy Casey with grandchildren Jay and Britney, participating in a Travellers’ rights protest in Dublin in 2009. Photograph: Alan Betson

In a report published yesterday, the Committee on Justice, Defence and Equality concluded it was “unsustainable” for the State to reject the ethnicity of Travellers.

The State has argued, at various points, that ethnicity was not proven and granting recognition would prove too costly.

“The recommendations outlined in this report should now be acted upon swiftly. It is no longer tenable to deny Traveller ethnicity. ”

However, chairman of the Fine Gael parliamentary party Charlie Flanagan TD last night questioned the recommendations, which he said had the air of “political correctness” about them.

“In a Republic, we are all equal under the law,” he said. “If we’re to recognise Travellers as ethnically separate, then what about Protestants, Jews, Connemara men or people from south Dublin?”

The report also calls on the Taoiseach or Minister for Justice to make a statement to the Dáil confirming that the State recognises Travellers as an ethnic group.

A spokesman for Minister for Justice Alan Shatter said he was looking forward to receiving the report, and its recommendations would be taken into account as part of his deliberations.

The report also recommends that the Government write to relevant international bodies confirming that it recognises Traveller ethnicity, and says the Government should examine whether any new legislation is required.

Traveller groups, who have been campaigning for such a move for almost four decades, yesterday welcomed the report’s publication as a historic moment .

Brigid Quilligan of the Irish Traveller Movement said: “We are speaking about people who have been on the island of Ireland for as long as anybody can record and recognition for the valuable contribution we have made to Irish society.”