Clause on McMahon document removed from adopted programme for government 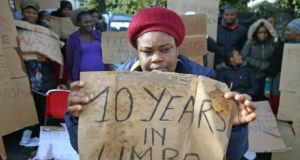 Asylum seekers protesting against conditions at Birchwood House direct provision centre in 2014. The Government has dropped a commitment to implement a report on the reform of the asylum and direct provision systems. Photograph: Patrick Browne

The Government has dropped a commitment to implement a report on the reform of the asylum and direct provision systems. The report was commissioned by the last government.

The draft programme for government included a pledge to “implement the recommendations of the McMahon Report as swiftly as possible”.

However, this passage has been removed in the adopted programme for partnership government agreed between Fine Gael and some Independents and published on Wednesday.

The final report from the Working Group to Report to Government on Improvements to the Protection Process, including Direct Provision and Supports to Asylum Seekers published in June last year was chaired by retired High Court judge Bryan McMahon.

It made 173 recommendations. Among these were reducing the time asylum applicants wait for a final decision and improving living conditions while waiting.

Concern about the lack of progress on implementation has been growing.

Other recommendations, including allowing access to the labour market, access to high-level education, increases in welfare allowances and communal cooking facilities, have not been implemented.

The draft programme for government states: “Long durations in direct provision are acknowledged to have a negative impact on family life. We are therefore committed to reforming the Direct Provision system, with particular focus on families and children and will seek to implement the recommendations of the McMahon Report as swiftly as possible.”

The adopted programme does not contain the final clause referring to the McMahon report.

Former minister of state for equality and new communities, Senator Aodhán Ó Ríordáin, who advocated full implementation of the McMahon report, described as “deeply worrying” its “deliberate rejection” by the new administration.

He said the working group had had representatives from all government departments as well as NGOs and was a product of compromises and “all signed off on it”.

A Department of Justice spokesman said: “The Government and the Tánaiste are fully committed to implementing the McMahon report and its recommendations. The situation has not changed.

Eugene Quinn, director of the Jesuit Refugee Service, said implementation “should not be reduced to a numbers game”. It remained unclear which of the 90 recommendations had been implemented, he said.

“For the individuals, children and families JRS Ireland works with it is the implementation of those recommendations that would lead to real and qualitative change in their lives.”