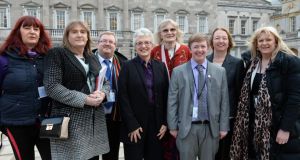 Transgender rights campaigners have called for amendments to be made to the Gender Recognition Bill as the legislation starts being debated in the Seanad.

Although the legislation, which will allow a person to have the gender on their birth certificate changed, has been broadly welcomed some groups have concerns about certain aspects of the Bill.

Among these are the requirement of a medical report for someone to have the gender on their birth certificate changed.

“The medical opinion can be really hard to get in Ireland for trans people because very few medical professionals in Ireland deal with trans people,” said campaigner Sam Blanckensee. So it needs to happen, but “I feel there needs to be amendments to the bill”.

He also said there are issues around the preferred gender recognition of people in existing marriages, people under the age of 16 and others aged between 16 and 18

Senator Katherine Zappone said the Bill is needed but it doesn’t go as far as it should. She also cited the medical evaluation as problematic.

“This essentially gives the impression that trans identity is a mental illness or some deficiency. If we could take those words of medical evaluation out it would increase the value of the Bill,” she said.