Mother who took her own life was devastated by homelessness, event hears 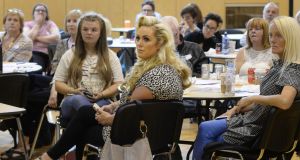 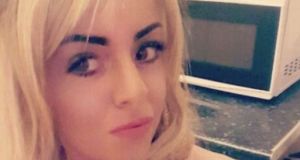 Danielle Carroll, from Tallaght, Dublin, who took her own life in a Co Kildare hotel.

The sister of a young mother who took her own life last year has described the devastating impact homelessness had had on her sibling’s mental health.

Caroline Carroll, speaking at the inaugural Danielle Carroll Summer School in Dublin on Saturday, read from a letter Danielle had written to the local authority days before her death, saying how she didn’t want to “break [her children’s] hearts anymore”. Her two sons, DJ and Carter, were aged seven and 20 months at the time of her death.

Held in memory of Danielle, who was 27 when she died on August 30th, 2017, at her emergency accommodation, the school’s theme was “What’s killing our women?”, and it promised “a day of discussion on the lack of support for many women in modern Ireland”.

Caroline told how Danielle, the youngest of seven children, had become homeless in January 2017 after her private landlord sold the house she had been renting.

“She was put in a hotel in Leixlip. It was so far away. All my family all live around Tallaght and we were all very close.”

Danielle was then offered a small bungalow near her parents’ home in the summer.

“She was absolutely over the moon. We were delighted for her,” said Caroline. She said her sister brought her little boy across to look at it and he was delighted.

“He was going to be living across from nanny and granda, could go through the park to see them.”

However, in August, after she had applied for a grant to help furnish the house, the offer was withdrawn and she was offered a house in Balgaddy, Clondalkin – an estate 15km from her family. Moving there would have meant changing DJ’s school.

“Danielle went downhill. She wasn’t herself after that. There was no help. From that time she deteriorated big time.”

In a handwritten letter to the council dated August 18th, read out by Caroline, Danielle said: “Two weeks ago I was offered a house, which I accepted. I told my two kids that we finally got a house as we have been living in a hotel the last nine months.

“The hotel is in Leixlip, Co Kildare. My six-year-old son goes to school in Fettercairn in Tallaght. That in itself is a hazard, trying to get him in on time each day. Most days he would be late going into school with the rush-hour. I brought my children over to view the new house. My six-year-old son was so happy to finally have a new home.”

Danielle recalled how when she called the council to find out when she could collect the keys, she learned the offer was withdrawn.

“I am understandably devastated at this news, as I was ready to start a new chapter in my life. I haven’t broken the news to my children yet and I don’t want to break their hearts anymore.” She said that, while she appreciated the offer of the house in Balgaddy, she needed to “kindly decline” it.

“I suffer very badly with my mental health and I recently was signed into the psychiatric ward in St James’s Hospital over the build up of the pressure of everyday living and struggling with having no home and living so far away from my family.

“When I was offered [the bungalow] I was really happy to finally have a place I can call my own home and to be able to walk my kids to school, to walk over to my family when I felt I needed support, only to have it taken away . . . yet again.”

“We are still shocked as a family that Danielle had taken her own life, because she idolised them children. The baby was stuck on her hip 24/7 and the older fella, he was always with her. They were her life. But we know, being homeless had [a] big impact on her state of mind. She felt so alone and so isolated. Behind all her smiles she was struggling.”

Among others who addressed the school were Independent Senator Lynn Ruane, Tara Deacy of the Clondalkin Drugs Task Force, Linda Hayden, the founder of Action Against Sexual Violence Ireland, and Clare O’Connor of Inner City Helping Homeless.