Commitment to fund refurbishment of empty council houses and flats 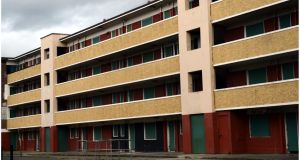 A spokesman for the Minister said he had committed to funding the refurbishment of “as many voids as Dublin City Council can refurbish”. Photograph: Bryan O’Brien/The Irish Times

Dublin city’s homeless services budget will be secured to the end of the year, Minister for the Environment Alan Kelly has pledged.

A spokesman for the Minister said he had also committed to funding the refurbishment of “as many voids as Dublin City Council can refurbish” in an effort to address the capital’s homelessness crisis.

He was speaking after a meeting between Mr Kelly and a cross-party delegation of Dublin city councillors led by lord mayor Críona Ní Dhálaigh.

The meeting, which had been sought by Ms Ní Dhálaigh, was also attended by Dublin City Council chief executive Owen Keegan and the director of the Dublin Region Homeless Executive Cathal Morgan.

The council has been facing an €18 million shortfall in its budget for homelessness services, with some saying the budget would run dry by the end of this month.

Sinn Féin councillor and chairman of the council’s housing strategic policy committee, Dáithí Doolan, welcomed the commitment to ensure homeless services would be funded to the end of the year.

“We agreed on quite a comprehensive agenda and we strived to discuss as much as possible within a limited time frame. We are satisfied that the Minister has agreed to release the funding for homeless services and to turn around the voids.”

There are about 950 vacant local authority dwellings in Dublin city.

Mr Doolan added: “Unfortunately, however, when the issues of rent control and increasing rent allowance were raised, the Minister was non-committal and kicked the can down the road. ”

The councillors also said they had secured a commitment from Mr Kelly to fund the provision of extra social housing units on sites they would identify in the next fortnight.

‘The problem is households’ - Restaurants shocked at hospitality ‘lockdown’ 10:05
Coronavirus: Dublin hospitals under ‘significant pressure’ as county set for Level 3 12:00
Infant hurt after scrambler crashes into stationary quad in Dublin 09:40
Trump envoy to Northern Ireland warns against hard border 08:48
Man due in court over robbery of wheelchair user in Cork 08:06