Cyclists raised €77,000 in sponsorship for Kildare-Galway trip earlier this month 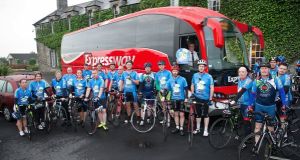 Some of the hundreds of cyclists took part in Console East-West Cycle in 2016. Photograph: Suzanne Collins Photography

Just earlier this month, 270 cyclists set off from Celbridge, Co Kildare, to Galway to raise funds for Console.

The 200km Console East-West Cycle raised almost €77,000 for the charity and was sponsored by a number of companies, including Bus Éireann, Glanbia, Kepak, Keelings, Applegreen and two hotels.

One cyclist who raised €320 through personal sponsorship said he was shocked to learn of the irregularities at the charity.

He had first seen a promotion for the RTÉ Prime Time programme on social media the day before it aired and had “no idea” of what was allegedly going on at Console before that.

“I’m pretty disgusted, to be honest,” he said.

“You are raising money under false pretences, essentially. The worst thing was your man (Paul Kelly) was there at the start of the cycle and gave one of his speeches, and he was there that night at the dinner.

The person said the problems at Console appeared to be “another example of bad regulation”.

Console is under investigation by five State bodies over allegations of mismanagement and lavish spending, is also being pursued by the UK charity regulator, the Charity Commission.

Console was founded by Mr Kelly who maintains he still runs the charity despite the fact that his resignation was announced last week.

A person associated with the show, who did not wish to be named, said he believed the donation to Console was “on hold”.

Celbridge GAA Club is also among the organisations that have supported the counselling charity.

Forty people took part in a Strictly Come Dancing event at the club’s premises in March, with drag act Mr Pussy and singer Frances Black on the judging panel.

The organisation said in a statement on its website that a number of its members contributed to the success of that event and continued to be active fundraisers for Console.

“In 2015, Celbridge GAA Club, on behalf of its membership, made a presentation to Mr Paul Kelly in recognition of his charitable work, this presentation was made at our annual mass for bereaved members.”

The club said it would be making no further comment and that the thoughts of members at this time were with the individuals and families that the charity supports during difficult periods.

Former mayor of Galway Peter Roche, a former ambassador and fund raiser for Console said on Thursday the organisation was “irreparably damaged” and “tarnished”.

He said he had stopped a cheque for €2,200, made out to Console, which represented part of the proceeds of the annual mayoral ball.

Mr Roche, who lost his son Colin to suicide, said he felt “disgusted, annoyed and betrayed”.

“It was almost like a bereavement, dealing with this shattering news,” he told RTÉ’s Today with Sean O’Rourke show.

“I think Console is irreparably damaged. I can’t understand how long it went on, how a family could spend funds on anything other than the service.”

On the same programme, Minister of State for Mental Health Helen McEntee, who lost her father Shane to suicide, said the revelations threw “a shadow” over Console’s service.

“This affects everyone from staff, to fund raisers to the vulnerable people using the service - it is important that money is spent appropriately and properly.

“There is a need to ensure that Console services continue. The vision of the people who work there must continue.”

The UCD Agricultural Science society (AgSoc) this year donated €42,000 to three charities, including Console, which received some €32,000 of the funds.

Students raised the money through numerous fundraisers including events in Dublin city, during Ag week at the college and through a raffle for a pedigree Angus heifer.

Paul Kelly accepted the cheque directly, telling the students and committee what impact the funds raised would have for the charity and those they aid on a daily basis.

He told the students the charity hoped to use their donation to assist in the ever growing need for its 24-hour helpline for farmers and rural dwellers under mental health stresses.

Journalist Charlie Bird, who had pledged the royalties from his book about the marriage equality referendum to Console, said on Wednesday that no funds from it had been given to the charity.