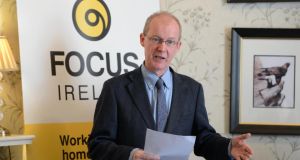 A housing charity is to seek legal advice on a decision by the Department of Social Protection not to increase rent supplement rates.

Focus Ireland said the decision to maintain rates at levels set in June 2013 could mean the department was failing to give priority to the legal purpose of the rent-supplement scheme. The department’s long-awaited review concluded that the rates should not be changed, despite calls from housing organisations over the past year for increases to meet market rents.

Rents in Dublin increased by almost 10 per cent last year and by almost 4 per cent outside the capital. The highest rent a couple with two children, in receipt of rent supplement, may pay in Dublin is €975 a month and €900 in Fingal. In Cork it is €725, in Limerick it is €550 and Galway €725.

The report acknowledged there had been a “substantial fall in available supply of rentable housing stock”, but said increasing rent supplements would increase rents across the board.

There are 71,500 households in receipt of rent supplement, of which about 48,000 are deemed “long-term dependent” on it. Together with about 6,000 households on the rental assistance scheme, they account for about 34 per cent of the private rented sector.

Although recommending no increase in the core rates, the report did call for flexibility by community welfare officers in applying the limits.

Mike Allen, director of advocacy with Focus Ireland, said the report had “no credibility as an objective review of the income levels which households relying on social welfare need to hold on to their homes.

“We now intend seeking legal advice as to whether the department is acting outside its legal remit in failing to give adequate priority to the objectives of the scheme as set down in legislation,” he said.