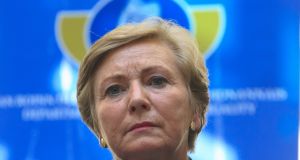 Minister for Justice Frances Fitzgerald faces a second day of questioning by the UN committee in Geneva. Photograp: Gareth Chaney/Collins

The Ireland rapporteur on the committee, Yuval Shany, said yesterday The Protection of Life During Pregnancy Act continued to criminalise pregnant women who had a right to an abortion under the Covenant on Civil and Political Rights (ICCPR).

Ms Fitzgerald, who is leading the delegation to the UN Human Rights Committee in Geneva, faced robust questioning on issues including symphysiotomy, human trafficking, asylum, policing oversight and the merger of human rights bodies, as well as access to abortion.

She faces further cross questioning on these issues today, as well as scrutiny on Traveller rights, the treatment of the Roma community and lack of access to non-religious schooling.

The UNHRC is conducting its fifth periodic review of Ireland’s compliance with the ICCPR.

In questioning yesterday, Mr Shany said that while the committee had in the past accepted varied practices among member states on abortion, there were circumstances where abortion must be available under the Covenant – “and certainly not criminalised”.

These included serious risk to the life or health of the mother, fatal foetal abnormalities and rape or incest.

“While the 2013 Act represents some improvement on the previous situation it does not address many of the committee’s concerns and has left in place the criminalisation of abortion even in circumstances in which we deem (member) states to be under an obligation to allow safe and legal abortion.”

It was “disappointing” to hear Ireland had no plans to remove Article 40.3.3 of the Constitution, which guarantees to vindicate as far as possible the equal rights to life of the mother and unborn, “notwithstanding the statement made by the previous Minister for Justice, Alan Shatter, that the current regime results in ‘unacceptable cruelty’.

“Can the delegation explain how it reconciles its current laws on abortion with its obligations under article 6, and in particular, article 7 of the Covenant – which is, I may remind you – an absolute right?” he asked.

Mr Shany asked how the stipulation that a pregnant woman at risk of suicide be examined by three clinicians before being allowed an abortion could be “consistent with the obligation to protect her against mental torture”.

He also asked the delegation to comment on concerns about inequality as the law “adversely affects vulnerable groups of women” including the poor , asylum seekers, those in state care and women with disabilities who may be unable to travel.

Mary Jackson, principal officer at the Department of Health, responding to Mr Shany, said Ireland’s approach to legislating for abortion complied with Article 25 of the Covenant which guaranteed all citizens’ right to vote and self-determination.

After today’s session the 18-member committee will consider what it has gathered and issue its fifth set of concluding observations on Ireland within the next fortnight.