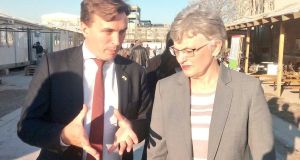 Minister for Children Katherine Zappone being guided through a migrant camp in Athens by Luke Feeney, deputy head of mission of the Irish Embassy in Greece. Photograph: Twitter

Tánaiste Frances Fitzgerald and Minister for Children Katherine Zappone began a three-day official visit to Greece on Sunday to see at first hand the effects of the migration crisis.

The visit aims to provide the Minister for Justice and Equality and Ms Zappone with an opportunity to assess progress to date and how to further build on that progress.

By the end of this month it is expected that 400 people will have arrived or been cleared for arrival to Ireland from Greece under an EU programme. This is in addition to Ireland’s intake of refugees from Lebanon.

The Ministers are accompanied on their visit by senior officials from their departments as well as the director of the Irish refugee protection programme, the refugee applications commissioner and a childcare specialist.

The trip includes a visit to reception camps and meeting migrants, children and staff, senior Greek ministers, Irish officials working with the migrants, as well as various NGOs, UN agencies and representatives of the European Asylum Support Office.

The Tánaiste said the visit provided “an opportunity to engage directly with the Greek authorities as well as people working on the frontline and to further demonstrate Ireland’s commitment to playing a full part in International efforts to resolve this crisis”.

Ms Zappone said: “I will also see at first hand the vital work of Irish volunteers on the ground. So far this year, 112 lone children have arrived in Ireland, of which 66 remain in the care of my officials at the child and family agency, Tusla.”