You don’t have to be rich to be a philanthropist. The One Percent Difference campaign wants us to give a sliver of our time or money to charity 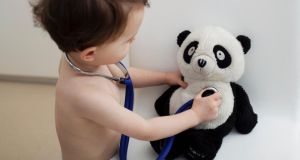 Help at hand: playing with sick children is a kind of philanthropy. Photograph: Image Source/Getty

Every Monday morning Oonagh Manning, who is 76 but comes across as half that age, gets into her car and drives the 100 or so kilometres from her home, in Gorey, Co Wexford, to Our Lady’s Children’s Hospital in Crumlin, in Dublin.

There she spends two hours or more manning the JustAsk help desk. She may also put in some time with the PlayWell scheme, occupying children and so taking a little pressure off nursing staff. Chances are that a dozen or so other volunteers will be doing much the same, each day of the week, at each of the 20 hospitals across the country that the Children in Hospital charity helps.

“I try to put a smile on a few faces,” says Manning, “harassed mums and so on. People are frazzled by the time they get to the hospital, often not knowing where to go or who to see, and it’s great to be able to help. “

The thinking behind the campaign is that the Irish are good at responding to appeals after dramatic events – earthquakes, floods or famine, for instance – but not so good at giving consistently.

Most people probably wouldn’t regard as philanthropic an ordinary person doing a little consistently, but, for organisations such as Philanthropy Ireland, which created the One Percent Difference campaign, Manning and hundreds like her are as much philanthropists as the likes of Chuck Feeney. Feeney, an 82-year-old Irish-American businessman, has spent the past 32 years giving away $6.2 billion and aims to donate his remaining $1.3 billion to good causes by 2016.

“We are way behind other countries,” says Karen Hand, a social psychologist. “Why? Partly because we were not wealthy historically. Look at the UK, at the Cadburys or other Quaker industrialists. In the States, [philanthropy] grew from the Protestant work ethic, like with [Andrew] Carnegie, and the rich getting to the point of saying to themselves, ‘Right, now I’m rich, and I’m going to set up a foundation.’ ”

The thread that links the rich and the not so rich in giving to a cause is, she says, “an awareness that we’re all connected, that there is a thing called society, and that they can do something”.

Maurice Healy is at the other end of the philanthropy spectrum from Manning. He is head of Healy Group, an Irish enterprise with a global reach in sourcing and supplying raw-material food produce, pharmaceuticals and chemicals.

Healy and his wife have long supported charitable and social entrepreneurial causes; about 10 years ago they realised that “we had enough money for the rest of our lives” and it was time to get serious about giving something back. Now Healy spends about half of his time on philanthropic endeavours.

“I needed to address some of the issues around me that needed addressing,” Healy says. With his company headquarters and first home in Tallaght, in Dublin, he didn’t have to look far in pursuit of worthy projects. “I began to identify causes in the area.”

Healy subscribes to Chuck Feeney’s dictum of giving while living but adds his own: “You can also share to shape: shape your community by making it better . . . People see philanthropists as people with money, whereas philanthropists are really people with time and talent and energy to give something back.”