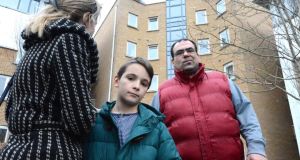 Ventsislava Lyubenova with her son, Angel, and husband Ivaylo Siromashki outside the apartment in Blanchardstown. All their possessions are still inside. Photograph: Cyril Byrne

For almost two weeks, Ventsislava Lyubenova, her husband Ivaylo Siromashki, and their son, Angel (10) have been locked out of the apartment they had rented since 2009 in Blanchardstown, west Dublin.

On the afternoon of November 20th, Mr Siromashki returned home to find the locks changed and a notice on the front door saying the property had been repossessed by the Dublin County Sheriff, on behalf of the EBS Building Society. “Please do not enter the premises as it is an offence,” it said. Beneath, a phone number for O’Dwyer Property Managers was provided.

Ms Lyubenova said they received no notice that the property was being repossessed. Her husband called her and she “went straight away” to the Garda.

“They called ODPM and came back to me and said I had to contact a solicitor. It was a civil matter not a criminal one,” she said. “I tried calling the landlord but he didn’t pick up the phone.”

She said she then called the sheriff. “They said I should contact the solicitor for EBS and gave me the number.

She contacted solicitor Brendan Maloney, who advised her that while he would like to go into court seeking an injunction against the eviction, the PRTB would have to adjudicate first on the legality of the eviction.

Under the Residential Tenancies Act, disputes in the private rented sector must be adjudicated on first by the PRTB and cannot come before a court until then. She has opened a dispute process with the PRTB and has been told her case is an “emergency” and will be treated as such.

They have not been able to retrieve anything from the apartment since November 20th.

“Not even our ID, passports. We have had to borrow clothes, buy some.

“It is so humiliating. I have been in Ireland for 12 years. Angel is an Irish citizen. All we want to do is pay rent and live our lives. How can this happen in Ireland in the 21st century?”

Ms Lyubenova said she and her husband, who are originally from Bulgaria, never missed a rent payment and always had good relations with the landlord.

Angel has a skin condition which has flared up since November 20th. He has been referred to a child psychologist.

They are now staying with friends in Celbridge – 20km away from Angel’s school.

He is “pretty sad” about not being able to go home, he says.

The Dublin County Sheriff’s Office confirmed it took possession of the property, which it said was vacant at the time, on behalf of the EBS. It said solicitors for the EBS confirmed there was a tenant in the property who was on notice of the proceedings.

A spokesman for the PRTB said: “The board is currently liaising with solicitors for both parties to see if this matter can be resolved quickly. Our legal advisors are also considering our legal options as we take the matter and the impact on the tenants very seriously.”

The EBS said it could not comment on individual cases.

O’Dwyer Property Managers referred all queries to the EBS.

1 Des Bishop apologises to Traveller community for comments in interview
2 One hundred Irish retailers for all your online Christmas shopping
3 Gym owner plans to defy restrictions and open
4 Suzanne Lynch’s US Election Diary: Trump ‘walks out’ of TV interview at White House
5 Miriam Lord: All test and no trace makes Jack, and heaven knows who else, a very ill boy
Real news has value SUBSCRIBE