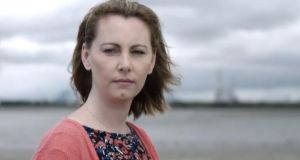 Emma Ní Mhathúna, a mother of five and one of the women who had a delayed cervical cancer diagnosis uncovered in the recent review by the HSE

This doesn’t feel like my life. It feels like a dream; a really horrible dream. I know what I’m saying is true but it still doesn’t feel real. I’m in shock. No amount of therapy can prepare you for this.

What first caught my attention was Vicky Phelan’s misdiagnosis. I had so much sympathy for her and when her smear test results came out I thought “what’s the chances of that actually happening?” I thought CervicalCheck was bullet-proof.

The Sunday before last I got the call which told me I was included in the audit of the smear tests that had shown the wrong results. My 2013 test said I didn’t have precancerous cells which it turned out I did and because of that I developed cancer. The next smear test was in 2016 and there it was immediately, I had cancer.

I won’t know until tomorrow how long I have because it’s a secondary cancer, my primary cancer was cervical cancer but it’s come back somewhere else. I went to see my GP on Wednesday and she broke the news to me. The X-ray had come back and both my lungs were shadowed. Tomorrow I’ll get the scan that tells me how long I have left to live.

My two children were in the waiting room when I got the news because one of them hurt his leg on the dance floor at the confirmation on Tuesday. The GP and I had to force ourselves to put on a brave face so that she could examine his leg. We had to pretend that we hadn’t talked about anything.

I told my children when we got home. I told the three boys separately. I needed it to be one-on-one so I could comfort them as I broke the news. They’re distraught.

I’m a logical and a practical person. I’m educated and intelligent but I still can’t get my head around what’s happening. Not only the cervical check story, not only Vicky Phelan’s story or my story but the way the Government is behaving. The whole thing feels ridiculous.

This isn’t a story that just broke today, this has been going on for weeks. I feel the only solution is to call a snap election. The time for action was when this started to unfold. The Government has had plenty of time to lean on experts to find out what to do. They’re not capable of looking after us. I feel very sad saying that, especially with the Taoiseach. He was new and young, he looked like he was going to be worth his weight in gold. But as soon as an actual crisis bends the country he’s not able for it. We’re his responsibility. There’s people dead and people dying. I’m dying. Inquiries mean nothing to us, money means nothing.

They’re huddling together and trying to stay quiet in Dublin because I’m far away in Ballydavid. But if things don’t start to shift I will march the streets with my children. They think they can buy my silence but there has to be repercussions. What kind of country is this that I’m leaving for my children?

Tony O’Brien is responsible for the public safety and women are dying. I’d like him to take responsibility for the fact that he has failed. This is a leadership problem, it’s whoever decided to try and save money by outsourcing smear tests. Our doctors and nurses are working around the clock, they’re left with this mess. I have a great medical team in Cork.

My faith in the people of Ireland has been restored because of the reaction since I did the radio interview. It has given me faith that this is a good country but we have been let down by our leaders.

We’re all going to die at some stage but I’m trying to come to terms with the fact that I’m a 37-year-old mother who is dying. There are so many people dependent on me. My five children are so young and this will have a dramatic affect on their lives.

I shouldn’t be dying, that’s what makes this a tragedy. I feel like I’ve essentially been murdered. I should be here another 50 years. The end of life is part of God’s plan but this isn’t God’s plan. I’m dying because of human error and that’s disgusting.

In conversation with Sorcha Pollak