Discrimination against Roma traced back to Middle Ages

From their earliest days in Europe, Roma were suppressed and excluded 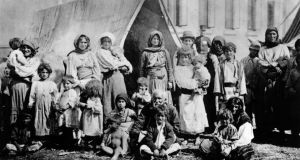 Gypsies in Bucharest circa 1930, where they lived in tents pitched in the middle of the street. Photograph: General Photographic Agency/Getty Images

Discrimination against Sinti and Roma is an inextricable part of their millennium-old history in Europe. The discrimination could be seen as an understandable reaction of the settled population to nomadic strangers. However the Roma and their advocates argue that the nomadic lifestyle is a consequence, rather than cause, of the discrimination.

This tragic chicken and egg situation stretches from Europe’s Middle Ages to today.

First arriving in Europe via Persia and Armenia in about 1200, the two separate – though related – groups of Sinti and Roma soon became known by the pejorative term “gypsy”, based on fallacy that they originated in Egypt. Religious motives and latent xenophobia played a role in mainstream hostility towards the Roma, as well as the economic situation of the host country.

Mainstream exclusion
From their earliest days in Europe, Roma were subject to laws to suppress their culture and exclude them from the societal mainstream. Their traditional professions – blacksmiths, musicians, circus performers – reflected a nomadic lifestyle forced on them by a widespread prohibition on buying land or entering the more stable occupations.

They were enslaved by land- owning Hungarian princes in the 15th century, while in 1545 the Diet of Augsburg, an assembly of members of the Holy Roman Empire meeting in the German city, declared that “whosoever kills a gypsy, will be guilty of no murder”.

England’s “Egyptians Act” of 1530 required Roma to leave or face deportation. An amended version in 1554 instructed them to settle down and abandon their “naughty, idle and ungodly life and company”.

Empress Maria Theresa of Austria-Hungary issued decrees in the 17th century forcing wandering Roma to settle, forbidding them to speak Romani (or face a flogging) and consigning children to orphanages and parents to workhouses. King Karl III of Spain and Friedrich II of Prussia followed suit.

In Russia, meanwhile, the first Roma were granted full civil rights when they arrived 300 years ago, becoming another strand in the sprawling, multicultural society.

In the late 19th century, a second major wave of migration – and discrimination – began as Romas from central and southeastern Europe spread across the continent.

A century ago, the Dutch reformed theologian and prime minister Abraham Kuyper summarised European prejudice thus: “Their decision . . . to pour into Europe has caused Europe nothing more than harm and as for them, it has become a disaster from which there is no return.”

By the early 20th century, European governments shoved Roma back and forth across borders, a precursor of the disaster in the Third Reich.

The Nazis deemed Sinti and Roma as “racially inferior” and began their systematic deportation in 1940, first to concentration and later death camps.

Up to 70 per cent of Europe’s Sinti and Roma population were murdered, an estimated 500,000 men, women and children.

Three waves of post-war migration and discrimination followed, beginning with programmes to attract migrant workers – including Roma – to western Europe in the 1960s; the collapse of the Soviet Union and Yugoslavia in the 1990s, and the accession of Bulgaria and Romania to the EU.

Denied fair chance
Advocates say today’s Roma in Europe – with up to 12 million people the continent’s largest minority – are denied a fair chance to secure housing, emp- loyment and education. One in three is unemployed and 90 per cent live below the poverty line, according to the EU Agency for Fundamental Human Rights.

German chancellor Angela Merkel had clear words last year when she opened a memorial in Berlin to the Sinti and Roma murdered in Nazi Germany. “Let’s not beat around the bush,” she said, “Sadly, Sinti and Roma often suffer today from exclusion and rejection.”