Complaints over education, child protection and housing continued to escalate in 2016 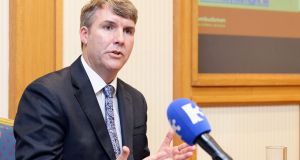 The Ombudsman for Children Dr Niall Muldoon: “Number of complaints suggest that public bodies and Government departments have a long way to go towards fully respecting and promoting children’s rights.” Photograph: Eric Luke

Children who are homeless and have significant disabilities and medical needs are not being prioritised on State housing lists, the office of the Ombudsman for Children has warned.

Government departments and public bodies are also failing to fully respect and promote children’s rights, according to Dr Niall Muldoon, Ombudsman for Children.

The Ombudsman’s 2016 annual report shows that education, child protection services and access to appropriate housing continue to be of great concern to parents and young people, while Tusla, the Child and Family Agency is operating as a “crisis agency” with “clear inconsistencies”.

“The number of complaints suggest that public bodies and Government departments still have a long way to go towards fully respecting and promoting children’s rights in the work that they do,” said Mr Muldoon. “I am more convinced than ever that children’s rights remain a crucial issue in Irish society.”

Education was the key concern raised last year, with 46 per cent of complaints relating to schools, management of peer bullying and alleged professional misconduct by teachers. Other complaints included problems with home tuition, school placements and school transport as well as provisions for children with special educational needs.

Grievances regarding Tusla and child protection issues made up nearly a quarter of complaints filed to the office last year. The Ombudsman has raised concerns that Tusla continues to primarily operate as “a crisis agency” and that there are “clear inconsistencies within the agency both geographically and in terms of how issues are dealt with”.

Complaints over health services for children and young people have also continued to rise year on year, increasing from 11 per cent in 2014 to 17 per cent in 2016. Last year’s criticisms included access to primary care services such as psychology, speech and language and orthodontic services, waiting lists for hospital procedures, access to provision for children with disabilities and access to specialist child and adolescent mental health services.

Access to housing was also of particular concern to parents and young people in 2016, with many people struggling to access appropriate housing for children with disabilities.

“There is an urgent need to ensure adequate provision of family friendly emergency accommodation so that normal family routines can be maintained as much as possible,” said Ms Ward.

“We also received concerning complaints about the adequacy of supports for children with disabilities and about the experience of some children with mental health issues trying to get help, especially at times of crisis.”

While the number of justice-related complaints has remained largely unchanged since 2014, the Ombudsman report notes a number of challenges in completing the final phase of modernisation at the national Children Detention Facility at Oberstown. These included industrial disputes and strikes, recruitment struggles, attempts by detainees to escape, concerns about staff safety and damage to the campus.