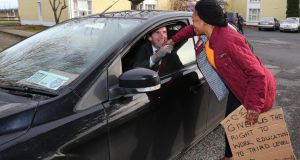 Minister of State Aodhán Ó Ríordáin with a resident at the direct-provision centre at the Montague Hotel in Portlaoise. Photograph: Lorraine O’Sullivan

All asylum seekers receive a short booklet of rules when they take up residency in the direct provision system.

“The Reception and Integration Agency would like to welcome you to this direct provision accommodation centre,” it says.

“The centre provides accommodation for you on our behalf. It is your home while your application for protection is being processed. We appreciate how difficult and stressful this period can be. We and the accommodation centre staff will be as helpful as possible during your stay.”

The reality, say many asylum seekers, is very different.

They describe a closed system where everyday humiliations and heavy-handed rules serve to underline their exclusion from wider society.

It’s a regime of which Msgr John Byrne of Portlaoise parish has had first-hand experience in recent days.

He says that last Friday he received a phone-call from Sean Lyons, the owner of the Montague Hotel – which accommodates about 160 asylum seekers – informing him he would not be allowed entry to the hotel.

“I asked him why and he said it was because of comments I had made about the Montague . . . So he effectively barred me from his property,” says Msgr Byrne, who has supported asylum seekers in the locality for years.

Under the rules that govern direct provision centres, the system has sweeping powers over residents’ day-to-day lives.

All residents are required to sign a register on a daily basis and may only receive visitors during prescribed hours.

These visitors are required to sign in and out of the centre, but the centre can refuse a permit and does not have to give an explanation.

Residents may only receive visitors in a public area rather than in their rooms.

“It feels like a prison more than anything,” says one resident, who has been living in a centre in Athlone behind a security barrier for the past five years.

“You feel watched the whole time. There is no real privacy. Everyone watches you come and go. People say things to you. You feel controlled. It’s an institution we live in. It’s not a home.”

For advocates and lawyers of those living in direct provision, access to the accommodation centres is often facilitated by staff. But it can also be denied without explanation.

Carol Sinnott, a solicitor who has represented numerous asylum-seeking clients, describes an “air of unwelcome” in many centres. Visiting clients in prison, she says, is often easier.

“Each time I have visited a centre and asked to speak with my client in the privacy of their room, that request was refused,” she says.

It means briefing with clients – where personal details are often discussed must be done in the open.

The State body responsible for the direct provision system says the house rules are designed for the safety and protection of residents. It adds they were drawn up by a working party which included an independent chair and representatives of campaign groups such as the Irish Refugee Council.

There is a complaints system for those unhappy with decisions. But it is not independent. Judging by the small numbers referred to it annually, few have much confidence in it.

A recent High Court ruling found many of these house rules to be unlawful, though it seems unlikely there will be any immediate change.

The Department of Justice says it is considering the ruling, while the wider ruling may be appealed by the asylum-seeking woman at the centre of it.

In the meantime, a Government working group is examining the system itself to see if changes can offer the possibility of enhancing the dignity of residents.

For many asylums seekers – stuck in the direct provision system for anything up to 10 years – these changes can’t come quickly enough.