Demolition of O’Devaney Gardens to be completed 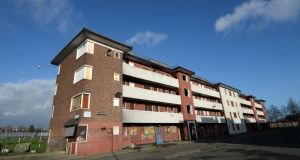 The demolition of the last remaining blocks of flats in O’Devaney Gardens, one of Dublin’s most troubled and dilapidated complexes, is to go ahead in three weeks’ time, eight years after it began.

Dublin city councillors have given approval to raze the last four blocks totalling 128 flats, fully clearing the site, to make way for a new development of almost 480 homes.

Although nine flats remain occupied, the last remaining residents are expected to move out to other housing shortly and to be given “letters of comfort” ensuring they can return to the newly-developed estate if they wish.

Councillors voted in favour of a motion from Workers’ Party councillor Eilis Ryan requiring all of the new homes to be “public, mixed-income housing”.

Under this scheme, all housing on the site will be rented from the city council, with 50 per cent of homes rented to applicants on the council’s housing waiting list, and 50 per cent rented to households earning above the social housing threshold, but with “demonstrated housing need”, who will pay higher rents in line with their income.

The 1950s flat complex, close to the Phoenix Park in Dublin, was to have been redeveloped under a public-private partnership between the council and developer Bernard McNamara, but after several delays the deal collapsed in 2008.

Most of the almost 300 flats had been emptied by that time in preparation for the regeneration scheme.

Demolition of the vacant blocks began in September 2008.

Most of the blocks were demolished in the intervening years but four remained, and until recently a handful of tenants remained living amid the largely boarded-up complex.

Last year then minister for the environment Alan Kelly directed the council to refurbish 64 empty flats for use for homeless families.

However, the city councillors overruled his proposal in the hope the land would eventually be developed for housing.

Last July the council said O’Devaney Gardens would be included in its vacant lands initiative under which it hopes to attract housing providers to build a mix of social, affordable rental and starter homes on 30 hectares of vacant land in the city.

The site had not originally been selected, but was added after parties expressed interest in developing it.

Covid-19 patients in hospital remain at high levels as lockdown extension expected 13:48
Everyone in Ireland to get Covid-19 vaccine by September, Minister for Health says 13:56
Woman in hospital after being attacked with knife in Dublin 13:02
Holohan warns of up to 1,000 Covid-19 deaths in January, calls for tighter air travel rules 13:02
Restaurants and bars could stay closed until the end of May, says Taoiseach 13:00