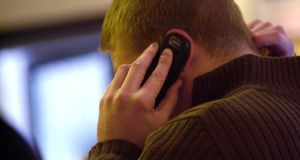 We need to accept that men communicate differently from women and find it more difficult to verbalise their feelings. Photograph: Cyril Byrne

For years, the stigma over mental ill-health has meant depression, self-harm and suicide have been shrouded in silence.

We kept the issues out of sight, behind the high granite walls of psychiatric institutions.

But as more people with first-hand experience of mental health problems speak up, it is leading to increased awareness and understanding of these issues and how to seek support.

That’s why Conor Cusack’s raw, unflinching and inspiring story is another milestone on the way towards a society where people feel they can speak more openly about what was once considered unsayable.

Latest indicators suggest that the stigma is reducing. More people are willing to share their mental health problems. And ever-increasing numbers realise that with support recovery is possible.

But there is still work to be done. Every week, eight men die by suicide.

Many of them, research shows, have never asked for help or opened up to those around them.

At Pieta House – a suicide and self-harm crisis centre – they have found that most calls are from women, even though men account for the vast majority of those who take their own life.

Joan Freeman, the founder of Pieta House, says we need to accept that men communicate differently from women and find it more difficult to verbalise their feelings.

That’s why her organisation has launched a “mind our men” campaign. It aims to give members of the public the skills to reach out to the men in their lives during times of crisis.

In the organisation’s experience, many people who are in crisis or go on to take their life do so as a reaction to a life event, such as the break-up of a relationship or the loss of work.

These signs can include withdrawing from social situations, not answering calls, spending a lot of time away from others.

While there has been a huge increase in awareness over the past number of years, it’s clearly not enough as men continue to die by suicide.

“There are hundreds of organisations doing great work but it’s family and friends who are on the frontline and who need tro educate themselves on the warning signs to look out for,” says Freeman.

“This is why we’re targeting the women and men of Ireland and empowering them to tackle the problem of suicide – spot the signs and save a life.”