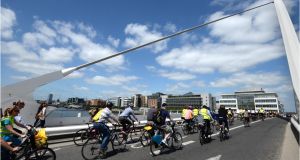 Detailed information about every community in Ireland, including how many people cycle to work, has been published by the CSO. File photograph: Dara Mac Dónaill/The Irish Times

Detailed information about every community in Ireland has been published by the Central Statistics Office (CSO).

The Small Area Population Statistics cover every aspect of life, from religious practice to how many people cycle to work or have access to broadband.

The data, which was compiled from last year’s census, will be invaluable across society, whether for State agencies allocating resources or private sector companies conducting market research.

For the second time, the CSO has compiled an interactive table of the statistics, which can be used to help make comparisons and trace patterns in individual areas across the country.

A wide range of headings are included in the statistics, including family make-up, educational achievement, professional occupations, ethnicity, commuter trends and access to the internet.

“It is available to the public, but also to Government departments and local authorities to make decisions in terms of resources planning for Irish society,” said statistician Brendan Murphy.

“This data is so detailed at a local level that it allows agencies to target resources.”

The data has many potential applications. For example, young parents looking to buy a home can analyse the surrounding area to see the age range of their potential neighbours, while businesses can find out where best to market their products.

The information is likely to assist policy development in many areas, including the rollout of transport infrastructure, given the wealth of area-specific data collected on people’s commuting habits.

The data on disadvantaged areas assists the Department of Education in the allocation of Deis schools.

It has taken the CSO about 15 months to boil the census results down to the extent that such in-depth data can be released.

“It’s the most detailed data available at this level of geography,” said Mr Murphy, who is responsible for its final dissemination.

“We are always trying to improve the quality and comparability of the data that we publish. We hold the census every five years, as opposed to some countries where it’s 10 years.”

Some of the information might be slightly skewed, given that the figures relate specifically to the people who were in a given area on the night of the census, irrespective of where they might normally live.

The 2016 interactive map shows, for example, that there are 456 divorced people in Killarney, 52 people in Athlone who own four or more cars, and 18 French people in Bundoran, which might not be precisely the same on other dates.

The data is broken down into 11 geographical “layers”, including 31 administrative counties, 3,409 electoral divisions, 18,641 small areas and 95 municipal districts.