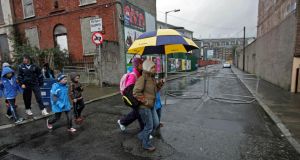 The GAA wants to use council-owned land to create a new main entrance to Croke Park (above, background) from Ballybough Road. The land is currently occupied by part of the Croke Villas estate, a 1960s flat complex on Sackville Avenue (above). File photograph: Eric Luke/The Irish Times

A deal on a major new development at Croke Park stadium has been agreed between the GAA and Dublin City Council following three years of negotiations.

However, the council cannot sign off on the agreement, which involves the construction of offices, restaurants, shops, handball facilities, a “processional boulevard” to the stadium, and the regeneration of social housing, unless it is approved by Minister for the Environment Alan Kelly.

The GAA wants to use council-owned land to create a new main entrance to the stadium from Ballybough Road. The land is currently occupied by part of the Croke Villas estate, a 1960s flat complex on Sackville Avenue.

The complex was to have been regenerated under a public-private partnership agreement with Bennett Developments, but those plans collapsed in December 2008. As a result, just nine of the 79 flats are occupied.

The GAA has offered the council €6.4 million for the use of the land, just over half of which will go towards the regeneration of Croke Villas, with the remainder spent on the new road.

The council has sought approval from the Department of the Environment for the deal. However, Croke Villas was one of the estates identified as having the potential to house families under Mr Kelly’s action plan on homelessness, published before Christmas.

Mr Kelly had directed the council to refurbish empty flats in estates that were awaiting approval for regeneration and make them available to homeless families.

Just two estates, Croke Villas and O’Devaney Gardens, were judged by the council management as having that potential, but no refurbishment has commenced on either.

Lord Mayor of Dublin Christy Burke said it would be a waste of money to refurbish the dilapidated flats for temporary use, and that Mr Kelly had become “obsessed” with an impractical plan.

Local Fine Gael councillor Ray Macadam said the Minister should be asked to rescind his direction so the council could accept the GAA deal.

A spokesman for the Department of the Environment said no decision had been made in relation to the complex.

“The department received a proposal recently from Dublin City Council in relation to Croke Villas and we are in discussions with them on the overall project.”

The GAA’s involvement in the regeneration project was first proposed more than four years ago and the council has been negotiating land prices since early 2012.

The GAA’s plans involve the widening of Sackville Avenue to provide a boulevard or processional entrance to the stadium. This would become the only match-day entrance and would take crowds out of surrounding streets.

Some 44 homes would be built away from the road, and a new “urban village” would be created which could encourage local enterprise with elements such as a dance studio or artisan bakery.

The development would allow for the expansion of Croke Park’s office facilities and a handball centre.