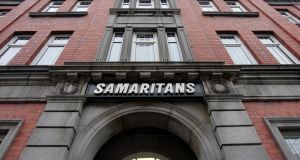 The Samaritans is one of a number of organisations that helps those who are experiencing suicidal thoughts. Photograph: Matt Kavanagh/The Irish Times

Mental health campaigners today praised Cork hurler Conor Cusack for his bravery in speaking out about his battle with depression.

Cusack wrote an open blog detailing how he struggled to deal with suicidal thoughts as a young man. He also appeared as a guest on RTÉ’s Prime Time last night.

In his blog, Cusack, whose brother is Donal Óg Cusack, describes how he tried to hide his depression from those around him, even as panic attacks and depression threatened to overtake his life as a teenager and young man.

His introduction to a clinical psychologist was a key turning point on his road to recovery.

“For those people who are currently gripped by depression, either experiencing it or are supporting or living with someone with it, I hope my story helps,” he wrote.

In his blog, Cusack - a member of the 2006 Cork hurling team - chronicles how he experienced a breakdown in his late teens.

“I curled up in the corner of the building. One of the lads working with me came over and he didn’t know what to do...I asked him to take me home. The GP called to my house and prescribed some sleeping pills and arranged for me to be sent to the hospital for some tests.”

He also describes how he came close to taking his own life, but how the support of family and a therapist helped him on a journey of recovery.

“I decided one night death outweighed my desire for living. I decided I was going to kill myself...A peace I hadn’t experience in years came over me.

“ I realised I’d no long id have to suffer. For some reason my mother never went to Mass and it was ultimately a decision of hers that saved my life.”

In his experience with mental health services, he was prescribed up to 18 tablets a day and advised to undergo electric shock treatment. However, he says a clinical psychologist helped him to deal with issues in his life.
“We sat opposite each other in a converted cottage at the side of his house with a fire lighting in the corner. He looked at me with his warm eyes and said ‘I hear you haven’t been too well. How are you feeling’... I looked at him for about a minute or so and I began to cry.

“When the tears stopped, I talked and he listened intently. Driving home with my mother that night, I cried again, but it wasn’t tears of sadness, it was tears of joy. I knew that evening I was going to get better. There was finally a chink of light in the darkness.”

He said he relived memories of bullying in school and began to realise that too much of his identity was tied up with hurling.

Cusack also says he saw the extent to which seeking help with his mental health problems required real bravery.

Today, a number of campaigners said Cusack’s words were an invaluable contribution in tackling the stigma that persists around mental health issues and seeking help.

In particular, advocates said they hoped his words would prove to be an inspiration for other young men in distress.

John Saunders, the director of See Change, an alliance dedicated to tackling the stigma surrounding mental health, said Cusack’s story was a powerful beacon of hope.

“He has eloquently detailed his journey of recovery. His story is a good story. It details how, step by step, someone can go from being popular and successful to desperation, and back again,” Mr Saunders said.

“Men don’t talk about these issues that often. They tend to play a macho, strong and resilient image. They don’t often say, ’I’m actually very vulnerable’. It’s fantastic that he has shared that.”

Paul Kelly of Console also paid tribute to Cusack, adding there is still much work to be done in tackling attitudes surrounding mental health problems.

“Too often, seeking help for young men in emotional or psychological distress is seen as a sign of weakness rather then strength,” he said.

“He is incredible brave to speak out so eloquently. He has clearly struck a chord with many other young people out there.”

* If you need help, there are many groups available to help.