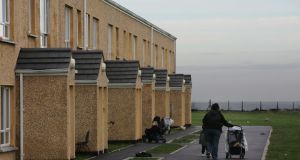 The Irish Refugee Council has said the new Minister for Justice had previously expressed concern in her role as Minister for Children about the welfare of young people living in direct provision.

The Irish Refugee Council (IRC) says it is seriously concerned about the welfare of three young people from asylum seeking families in direct provision hostels who are suicidal.

IRC chief executive Sue Conlan has called on new Minister for Justice Francis Fitzgerald to meet the parents of the three children, aged between 11 and 17, as a “priority”.

The three children — one boy and two girls — are from three separate families, living in two direct provision hostels, one of which is in Galway, Ms Conlan said.

Speaking at an event hosted by the Galway Integration Consortium today, Ms Conlan said the families were from Africa and the Indian sub-continent, and all had been in direct provision for at least three years.

“For different reasons, these three young people have all expressed the view that they can’t see the purpose of living,” she said.

“We have put them in touch with specific support agencies, and the parents themselves have spoken to psychologists, but the fundamental issue is that professionals cannot change a situation where people are living in conditions which are creating a sense of despair,” Ms Conlan said.

Ms Conlan noted that Ms Fitzgerald had previously expressed concern in her role as Minister for Children about the welfare of young people living in direct provision.

“We hope that now she is in a position to do something, that she will,” Ms Conlan said, welcoming Ms Fitzgerald’s appointment.

Ms Conlan said that a holistic approach needed to be taken to reform a system which involved living in one-room in hostels, dispersal to various parts of the country, delays in awaiting asylum seeking decisions from the authorities, lack of educational opportunities for children beyond Leaving Certificate, and lack of permission to work or undertake training.

Ann Irwin, co-ordinator with Galway City Community Forum which co-hosted the Galway event, noted that the policy of direct provision is now 14 years old. Originally intended to be a short-term measure, the majority of asylum seekers spend four years in the system, with a significant number waiting for between seven and 12 years.

Hostel resident Siphathisiwe Moyo said that “keeping people waiting for an answer for such long periods of time is so unfair”.

“I have been waiting for an answer for six years — that’s six years of living in one room with three children,” he said, explaining the impact of not being permitted to work while surviving on an allowance of €19.10 a week and €9.60 a week per child.

“And what will happen to them after they leave school? They will not be allowed to work and they are not entitled to go to university without paying overseas student fees – something I could never afford,” Mr Moyo said.

Mayor of Galway Padraig Conneely (FG), who attended the event, accepted accept a cake symbolising Galway made by Bisola Akanni, who has been living in direct provision for six years.

4 Sturgeon ups the ante with promise on independence vote