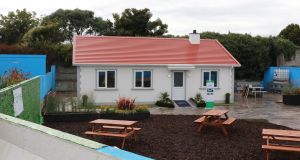 A housing co-op that planned to build on land being used for modular houses in Ballymun in Dublin is to seek planning permission for a new development at the site in the coming days.

Ó Cualann Cohousing Alliance is to apply for permission to build 49 houses, ranging from two to four bedrooms at Baile na Laochra in Poppintree, Ballymun, on a site that will wrap around the 22 modular homes, which are due for completion in the next two weeks.

Dublin City Council is to provide the site for the 49 houses, but the co-op, which is an approved housing body, will fund the construction of the development. Already 17 members of the co-op have mortgage approval for the homes.

Neither co-op was able to secure finance for their projects and in 2014 Ó Cualann offered to pursue a housing development using the planning permission.

This plan ran into difficulties late last year when the council announced that the site would be the used for its first modular housing project to accommodate homeless families who were living in hotels.

Members of CTSL protested at the site for two days last November. They have received a refund of part of their deposits and will receive a full refund once finance is drawn down for the new development.