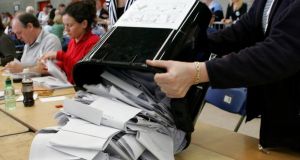 The general-election turnout in Dublin fell by 3.2 percentage points, from 62.9 per cent five years ago, to 59.7 per cent for February’s poll. Photograph: Cyril Byrne

The gap between voter turnout in working-class and middle- class areas of Dublin city narrowed in the general election, new figures show.

The numbers point to increased political mobilisation among working-class voters, according to Dr Adrian Kavanagh, geographer at NUI Maynooth.

The data, published by the Dublin City returning officer, gives a breakdown by polling station and ballot box, of votes cast across the five constituencies. A redrawing of constituency boundaries saw the number of constituencies fall from six, since the 2011 general election.

The turnout in the capital fell by 3.2 percentage points, from 62.9 per cent five years ago, to 59.7 per cent for February’s poll. Dublin Bay North had the highest turnout of the five at 67.9 per cent, while Dublin Central’s was the lowest, at 52.1 per cent.

Dr Kavanagh said the closing of the gap in turnout between middle-class and working-class voters has been happening since 2000.

“Turnout levels in some traditional working-class areas were close to or even higher that the average turnout across the five constituencies [in 2016].”

He said the 2014 local elections had pointed to a “similar narrowing of class-based turnout differences” across Dublin, with “improving turnouts evident in working-class areas such as north Clondalkin, across the 2000s”. Among the factors that increase turnouts are improving levels of education and high levels of political mobilisation, he added.

Some of the greatest falls were in middle-class areas. In the new Dublin Bay South constituency – formerly Dublin South East – the overall turnout fell from 60.5 per cent in 2011 to 53.8 per cent in 2016 – a decline of 11 per cent.

However, in poorer areas turnout held up better. The St Enda’s National School polling station, at Whitefriar Street in Dublin 8 – a constituency with a lot of social housing – saw its turnout fall by just 1.7 percentage points, to 41 per cent .

Dublin Central had the ballot box with the lowest turnout in the city – 22.1 per cent in a box in St Paul’s CBS on Brunswick Street, in Dublin 7. Turnout in this station fell by 2.25 percentage points to 36.5 per cent in February’s poll.