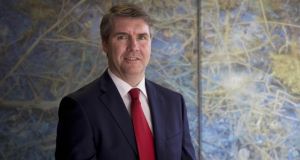 Children’s Ombudsman Dr Niall Muldoon: “It’s important that Tusla operates in a way that protects the child rather than the system.”

Children’s Ombudsman Dr Niall Muldoon does not mince his words when expressing his concern about the child and family agency, Tusla.

“I have said on many occasions, and I will repeat it again: Tusla needs more resources to provide the best possible service for children,” he says.

Official figures show Tusla is losing on average 150 social workers every year. By the end of 2016 the net increase in child and family social workers was just 56. This year the projected net gain in social workers is 62.

The lack of social workers is impacting on how vulnerable children are being protected.

“Tusla is especially struggling to retain staff and as a result it is providing a more crisis-driven service than one able to support families who are experiencing difficulties at an earlier stage and so prevent the potential later crisis,” said Frank Browne, chair of the Irish Association of Social Workers.

Dr Muldoon has similar worries: “I have real concerns about the inconsistencies that exist within the agency. I am not convinced that the necessary learning from mistakes is taking place. It’s important that Tusla operates in a way that protects the child rather than the system.”

In December last year, 5,413 – or one in five cases involving child-protection concerns or children in care – did not have a social worker. The Department of Social Protection says any risks to children awaiting a social worker are monitored but the ombudsman argues one unallocated case is “one too many”.

“More staff are needed to support huge demands on the service,” Dr Muldoon said. Planning, financing, and policy resources also need to be addressed, he added.

The compiled by website the Detail demonstrate there are proportionately four times as many children being monitored by child-protection services in Northern Ireland. There are three times as many social workers available to support children and families per head of population in the North.

Experts accept there are some legislative and operational differences between services but said the systems have more in common than not.

Dr Muldoon’s counterpart in Northern Ireland, the Commissioner for Children and Young People, Koulla Yiasouma, believes the figures do not suggest higher levels of child abuse in the North.

“What I think they say is that our system is more mature and therefore responding to children and young people,” she said.

Ms Yiasouma said social services in the North are under-resourced by UK standards. “If we’re found wanting with those jurisdictions [in the UK], and the jurisdiction next to us is found wanting when compared to us, it does beg the question what is happening in the South?”

Dr John Devaney, a senior lecturer at the School of Social Sciences, Education and Social Work at Queen’s University Belfast, says the “two countries are not so dissimilar that you would expect there to be a vast difference”.

Tusla said the systems were different and that comparison would “not provide accurate insights”.

A statement issued on behalf of Minister for Children Katherine Zappone said the child-protection system in Northern Ireland “is framed in a different legislative environment, with regulations and administrative arrangements which are not directly comparable to this jurisdiction”.

The Minister said recruitment challenges would “continue to be difficult” in the coming years.

Number of people in hospital with Covid-19 drops to 597 10:56
Baarack the overgrown Australian sheep shorn of his 35kg fleece 09:57
Gardaí believe shooting of 17-year-old in Dublin was failed murder attempt 08:44
Covid-19: Vaccination programme ‘chink of light’ for travel industry 06:00
Could comedy offer a way to communicate science more effectively? 06:00