Childcare workers earn as little as €5,700 a year in State schemes 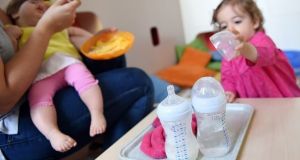 State investment in childcare amounts to 0.2% of GDP, compared with an OECD average of 0.8% and UN recommended benchmark of 1% – which is exceeded by the UK, France and the Nordic countries. Photograph: Getty Images

Childcare workers in State-funded schemes can earn as little as €5,700 a year , an unpublished report from the Irish Congress of Trade Unions has found.

Casualisation is growing in the sector, with staff turnover rates as high as 22.6 per cent – almost as high as among waiters and waitresses.

The report says significant improvements in pay and conditions for its mainly female workforce, will be “central to the implementation any high quality model of early care and education”.

The report, a Who cares Report on Childcare Costs and Practices in Ireland, draws on a survey of 3,703 trade union members who use childcare services.

An overreliance by the State on the private sector to deliver childcare and continued chronic under investment in public provision, has “the potential to deter single parents and secondary earners – typically women – from taking up paid employment”.

It also notes women’s employment rates fall between the ages of 25 and 49, with the difference in rates between these ages – at 20 per cent – the fourth highest in the EU.

Many respondents said almost all their earnings were going to pay childcare.

For the lowest income households (€24,999 or less) the cost of childcare is more important than quality when choosing where their children will be looked after, as costs are so high. Some 39 per cent of these respondents used relatives for childcare and 24 per cent private childcare.

As income increased they were more likely to used private providers.

Earnings in the sector “are a function of hours worked”.

“The operation of the ECCE (Early Childhood Care and Education) for only 38 weeks of the year has led to a growth of casualisation in the sector as a result of closures during the summer months when funding for the government initiative does not apply . . . If a childhood professional was working for €10 an hour, 15 hours a week for 38 weeks a year as per the timeframe provided for . . . their annual salary would amount to only €5,700.”

State investment in childcare amounts to 0.2 per cent of GDP, compared with an OECD average of 0.8 per cent and UN recommended benchmark of 1 per cent – which is exceeded by the UK, France and the Nordic countries.

This amounts to a “serious social policy flaw with repercussions for the needs of children, working parents, employers and society”, says the report.

Among its recommendations is that employers’ PRSI on portions of income above €100,000 be increased to 13.75 per cent – to yield €150 million, to be ringfenced for childcare investments.