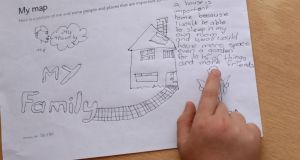 “The number of children accompanying adults [in emergency hotel-type accommodation] reached record highs,” according to a report from the Dublin Region Homeless Executive. Photograph: The Irish Times

Child homelessness in Dublin is increasing at more than twice the rate of adult homelessness, the latest official figures show.

The figures are contained in the Quarter 1, 2015 Report from the Dublin Region Homeless Executive, which shows 2,987 adults accessed emergency accommodation in Dublin during the first three months of this year. This compares with 2,306 in the same period last year.

On the last night of March, there were 1,868 adults in emergency beds, up 34 per cent on the 1,394 on the same night last year. There are now more than 1,800 adults staying in emergency accommodation in Dublin every night.

However, the numbers in emergency beds have grown. While an average of 147 emergency placements were made each night of the last three months of last year, an average of 227 a night were made in January to March. “Notably all beds are filled each night as demand for services has continued to grow,” says the report.

Some 997 of the 1,868 adults in emergency accommodation on March 31st were considered long-term homeless, or homeless for six months or longer. This compares with 763 long-term homeless in the January to March period last year, an increase of 30 per cent.

A night cafe for the homeless opened in Dublin in January. It initially had a capacity of 30, which has been increased to 50. During the first quarter, some 660 adults used it.

On a positive note, 236 individuals moved out of homelessness into housing, 65 per cent more than the 143 that found housing in the first quarter of last year. Far more (193) moved into social housing than the “record low” number of 43 that found accommodation in the private rented sector.