Chaplaincy reaches out to help the ageing London Irish 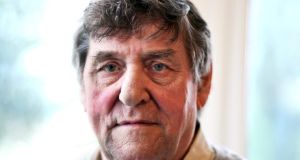 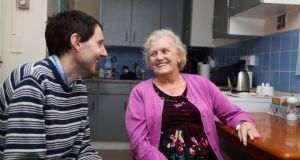 Paul Raymond, manager of the Irish Chaplaincy Service seniors project, talks to client Veronica Finney (79) in her flat in west London. She is originally from Armagh. Photograph: Joanne O’Brien 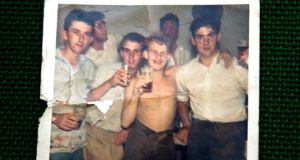 Snapshot from the early 1960s featuring Patrick Casey as a young man (far right) in Leeds with his friends from the building sites.

Paul Raymond grew up in Liverpool, raised on Irish songs and stories – even though the Irish connection dates back to great-grandfathers who left Limerick and Wexford in the late 19th century. “We’ve cousins in Ferns in Wexford, their ancestors were involved in the 1798 Rising,” says Raymond, as he walks along a street in Willesden in north London, heading to the home of an Irish pensioner.

The father of two works for the Irish Chaplaincy Service, which has run a seniors project since 2005 that now has more than 200 people on its books. Its oldest client died just weeks ago, aged 102. “It is the way that people let you into their lives that impresses,” he says, standing at the door in Willesden of 70-year-old Patrick Casey, born in Tipperary town.

“You hear their stories, their vulnerabilities, their pain. Sometimes a sense of loss and regrets. It’s about laughing and crying with people, helping when you can,” he says.

In his kitchen, Casey, who left Tipperary in 1949 when he was just five years old, talks of growing up in grinding poverty, first in London, later in Leeds. When he left Ireland, he came with his mother and brothers to join his father who had left earlier to find work in England. However, his sisters did not join them. They had earlier been taken into care.

“They joined us in the 1960s. We knew of them, but didn’t know them – it was like meeting strangers,” he says.

‘Irish blood’
The years since have brought their own troubles. A son is in jail. And Patrick’s health is poor, due to cardiac problems: “I would struggle to get to the end of the street.” His connection with the chaplaincy began when he approached it to help his jailed son: “He asked me why they were helping him. I said, “Because you have got Irish blood in you, that’s why.” (The chaplaincy was established in 1957, as a direct response by Catholic bishops in Ireland to the needs of the Irish then streaming to Britain.)

Soon, the chaplaincy volunteers were helping the father, not just the son: “I was at my wits’ end. I was isolated,” he tells The Irish Times as he sits at his kitchen table. A weekly call “usually at about 11 on a Thursday” from a chaplaincy volunteer, Breege McIntyre, is a cherished hour, while advice on a score of issues has eased worries.

“Without them, I don’t know where I would be,” he says, rifling through photographs, including one of a deceased brother sitting with primary school classmates in Tipperary. His brother had borrowed boots for the photograph. In one faded and scarred black-and-white image, Casey himself is seen as a vibrant young man, standing at a wall with now long-dead relatives.

Near Kilburn Lane, Veronica Finney (79), originally from Armagh, sits in her warm flat in a sheltered housing block, with lamps lightening the winter gloom. Eighteen months ago, she struggled to get up the steps to her old flat. Cancer has left her with one kidney, but never-ceasing infections threatened her ability to live on her own.

Accent understood
The chaplaincy was unknown to her until a nun put them in touch: “They’ve made a tremendous difference. Even with simple things. They understand my accent, for a start,” she said, chuckling. However, the help has been more than just emotional. In late 2012, Finney, then battling another bout of infection, faced life in an old people’s home.

“One nurse told me I was a bed-blocker,” she said, the hurt visible. “They were going to put me in a home. That would have killed me.”

By October 2012, with the help of social services and the chaplaincy, Finney was in her new home, with twice-daily visits from carers, a laundry service and a warden downstairs.

Today, she feels the tide has turned: “I have come on in leaps and bounds. I am getting a lot of my independence back. Paul has a power behind him,” she says, laughing again. Raymond blushes.

Given welfare cutbacks, the role of the chaplaincy is becoming more important: “Often, we are the continuity, the glue, that helps to get services to talk to each other,” he says later.

‘Cultural issues’
Increasingly, those same services recognise its role in bringing Irish cases to them: “Usually, they just don’t understand the issues that the elderly Irish face. It isn’t because people don’t want to do so, necessarily, but there are cultural issues that are best understood by those who are dealing with it every day,” he says.

In addition to the chaplaincy’s limited number of permanent staff, 20 volunteers help out: “The youngest is 23 or 24. The oldest is 79 and she’s still going strong. And it isn’t just Irish, though predominantly most volunteers are of an Irish background. One is a Sicilian. He says that he knew what it was like to be alone.”

Raymond is now four years with the chaplaincy: “It’s been really great, rekindled my Irish links. They had been in the past, but now my Irishness is part of me, again.”

Covid-19: ‘We are emotional and exhausted’: Parents of children with special needs relate their experiences